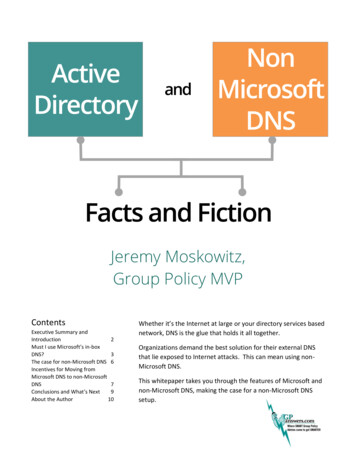 Active Directory and Non Microsoft DNS: Facts and FictionExecutive Summary and IntroductionWhether it’s the Internet at large or your directory services based network, DNSis the glue that holds it all together. A simple DNS failure can translate into abusiness failure as well. If DNS isn’t working right, computers simply cannot talkwith one another, leading to a “business blackout” until the problem is rectified.It’s probable that you use a non-Microsoft solution for your external DNS service.If so, you aren’t alone. When it comes to choosing a DNS for use with ActiveDirectory, most administrators simply pick “what’s in the box from Microsoft.”But it doesn’t have to be that way, and indeed, there are incentives to utilizingnon-Microsoft DNS, from a security and feature perspective. Security: Organizations demand the best solution for their external DNSthat lie exposed to Internet attacks. Third-party DNS solutions areavailable which are designed and built from the ground up with securityin mind. An organization’s internal DNS structure is equally open tomalicious threats, malware, phishing and data exfiltration.Visibility and Single view: Most organizations have a heterogeneous mixof technologies and accurate, one-stop visibility is quintessential toefficient compliance and control.Operational Efficiency: Optimizing OPEX costs by utilizing automationand workflow vs manual spreadsheet management.Intelligent Services: Integrated DNS-based traffic control, network loadbalancing and service monitoring add great value to an organization.In this whitepaper, you will learn about using non-Microsoft DNS with MicrosoftActive Directory.This paper includes customer stories where non-Microsoft DNS is used, whereyou can see how customers like yourself have increased their security and abilityto manage DNS with non-Microsoft DNS.This paper is for IT Managers and IT Pros and/or anyone who uses MicrosoftActive Directory.Jeremy Moskowitz, Group Policy MVP2

Active Directory and Non Microsoft DNS: Facts and FictionMust I use Microsoft’s in-box DNS?In the case of your typical Windows domain network, it is “traditional wisdom”that only Microsoft DNS must be used with Active Directory for internal DNSresolution. Many times this is because: It’s convenient to use the in-box solutionThe MYTH that Active Directory requires Microsoft DNS to functionproperlyOthers are doing Active Directory-integrated DNS, and therefore that waymust be the only way to do it.However, these myths simply aren’t true. In fact, Microsoft even published a KBarticle dispelling this myth many years ago. The key point is iterated multipletimes in multiple ways amongst Microsoft’s documentation surrounding ActiveDirectory and DNS. This can be found in the full Microsoft Technet article c755717(v ws.10).aspxAlthough the [Microsoft] DNS Server service is recommended to supportActive Directory, you can use other DNS server implementations for thispurpose.Note that this article refers to BIND (Berkeley Internet Domain Name) typeservers. But to be clear and specific, as the quote states you can use other DNSservers with Active Directory, and they don’t need to be specifically BIND. Thethird-party DNS server you choose simply needs to support Active Directory andsome rudimentary RFC standards governing DNS communication that most nonMicrosoft DNS servers support.Adobe had a non-Microsoft BIND product long before I got here, beforewe migrated to yet another non-Microsoft DNS product.- Brent Hetherwick Adobe. Technical Lead for DHCP, DNS and IPAM(DDI).Other articles which clearly reference Active Directory interoperability with nonMicrosoft DNS servers are: Interoperability with Other DNS y/cc959268.aspxVerifying your Basic DNS Configuration [With non-Microsoft c959303.aspxLinux to Windows Migration (Configuring Berkeley Internet NameDomain (BIND) to Support Active rary/dd316373.aspxJeremy Moskowitz, Group Policy MVP3

Active Directory and Non Microsoft DNS: Facts and FictionAnother place you can see that Microsoft-specific DNS is optional is in theDomain Controller promotion process. If you are creating an AD Forest for thefirst time, the wizard does not require you to select DNS. Notice how the wizardwill allow you to continue with the DC promotion process despite not choosingto install the Microsoft built-in DNS server component as is shown in thescreenshot below.There are some advantages of utilizing Active Directory-Integrated DNS for yourDNS zone besides the mere convenience of the in-box wizard. The primarybenefits are: Active Directory replication will take care of DNS zone replicationautomaticallyAll DNS servers are writableThis reduces the necessity to configure and allot for separate DNS zone transfertraffic. Other benefits include secure updates and DHCP integration but thesefeatures are available in third-party solutions as well.The fact is that Active Directory-Integrated DNS is an option but not required. Infact, even if you are currently utilizing Active Directory-Integrated DNS,Microsoft gives you the option to either add a secondary DNS or change thestructure to one of the traditional DNS zone types as is shown in the screenshotbelow:Jeremy Moskowitz, Group Policy MVP4

Active Directory and Non Microsoft DNS: Facts and FictionThe case for non-Microsoft DNSActive Directory administrators naturally want Active Directory to perform at itshighest capabilities. The key activities that Active Directory and its domaincontrollers should be performing are: AuthenticationAuthorization andAccounting (Logging)Everything else that Active Directory and its DC are tasked with doing will takeaway from these critical aspects. By integrating DNS into your DCs, you aregiving it a task which would necessarily take away from these critical activities.Additionally, your DNS servers should be especially protected and especiallysecure. In the case of an attack on DNS, like a DDOS (Distributed Denial ofService) attack (akin to SQL Slammer and attacks like those, but expressly forDNS), a Microsoft Active Directory-integrated DNS could have issues; since itwould be tasked with the DNS and the critical activities described above.Additionally, a flaw in DNS could have unintended repercussions for ActiveDirectory if properly exploited. For instance, a recent Security Update (3164065)was specifically crafted to shore up a hole for Microsoft Windows DNS server. Asnoted in the security update:The vulnerability could allow remote code execution if an attacker sendsspecially crafted requests to a DNS server.Additional problems could occur in a blended Windows and Linux environmentwhen using Active Directory-integrated DNS. The specific issue occurs when aLinux machine properly updates DNS but Active Directory DNS Scavenging isturned on. The problem occurs when Linux updates Microsoft DNS, but doesn’tcontinue to make DNS updates. This isn’t an intrinsic problem with Linux: TheDNS protocol has no imperative for Linux to keep DNS updated. And in thosesituations, with Active Directory-integrated DNS and Active Directory DNSScavenging turned on, those records could be unexpectedly eliminated. In theolder Microsoft article entitled “Cumulative list of reasons that DNS recordsdisappear from DNS zones” e number one reason is listed as:Cause Issue1DNS Scavenging ismisconfigured.SynopsisThe Scavenging feature on one or more DNS Servers was configured tohave overly-aggressive settings and is prematurely deleting DNS recordsfor Active Directory-Integrated DNS zones.Jeremy Moskowitz, Group Policy MVP6

Active Directory and Non Microsoft DNS: Facts and FictionIncentives for Moving from Microsoft DNS to non-MicrosoftDNSSo what is the incentive to not utilize the convenience of exclusively utilizingMicrosoft DNS servers?Below is a list of some of the value added features offered by third party DNSsolutions available today:1. Proactive automated adaptive behavior protection from DNS attacks,malware, and data exfiltration through customized DNS firewall security2. Utilize DNS and DHCP features that are unavailable from Microsoft in-boxsolutions such as Identity Mapping (linking IP addresses to users)3. Intelligently resolve queries and direct traffic according to geographiclocation4. Increased logging to help determine where issues and attacks are originating5. Utilizing a single solution for external and internal DNS (aka “Single View”).6. Operating system agnostic way to manage DNS.7. Increased security by reducing admin privilege usage.8. Increased granularity for control of dynamic DNS updates via IP-basedaccess-control, as opposed to the Microsoft’s 3-level approach of “none”,“secure only” (ie, AD-integrated clients (GSS-TSIG)), or “secure and insecure”(ie, anyone, no TSIG or IP-based authentication required)Let’s see how some administrators managed the last few items on this list.About Single ViewIf you combine your DNS into a “Single View” you get the best of both worlds.First, you get a one-stop shop.We had two DNS solutions in house, so it made sense to have a singlesolution which handled everything. Since we had Windows with multipleforests and trusts and Linux computers, it was a challenge to get a singleview pane of everything in our environment.- Andrew Stein, contractor for Department of DefenseSecond, you get the benefit of the DNS server responding to the queriesdifferently based on who is asking the question.Jeremy Moskowitz, Group Policy MVP7

Active Directory and Non Microsoft DNS: Facts and FictionAgnostic DNS managementIf you use a non-Microsoft DNS platform, it could work for all team members tobe on even ground.We consolidated to a single platform with a single interface. No matterour IT team’s skillset or background, it’s still DNS: we didn’t needparticular Windows expertise to use a 3rd party DNS solution. In fact, noparticular OS experience was required at all; the tool is 100% browserbased.- Andrew Stein, contractor for Department of DefenseReducing Privilege Use in Active DirectoryIf you use a non-Microsoft DNS platform, you could potentially remove some unneeded privileges.Security was increased because we could use different role based access,instead of using traditional windows roles. We could set up roles forgranular changes instead of perhaps too many rights within Windows.- Andrew Stein, contractor for Department of DefenseJeremy Moskowitz, Group Policy MVP8

Active Directory and Non Microsoft DNS: Facts and FictionConclusions and What’s NextMicrosoft has always conceded that any compliant DNS solution will workalongside Active Directory. In short, there is no imperative to use Microsoft DNSwith Active Directory. And real Active Directory customers are working just finewith this configuration.We’ve been using non-Microsoft DNS for more than 5 years, and no needto call Microsoft for any Active Directory support, DNS or otherwise.- Andrew Stein, contractor for Department of DefenseThere have been no support calls to my knowledge for Active Directoryregarding or involving anything with our non-Microsoft DNS.- Brent Hetherwick Adobe. Technical Lead for DHCP, DNS and IPAM(DDI).And getting started with non-Microsoft DNS doesn’t have to be hard. Likeanything, it’s a process, but that process doesn’t have to be particularly difficult.Once we made the decision, the process was a very straightforwardmigration. We were able to move multiple authoritative zones over, oneat a time as we made a transition. We started with Linux initially thenlastly, we migrated all of the Windows zones over.- Andrew Stein, contractor for Department of DefenseIf you’re interested in non-Microsoft DNS because of some of the items you’veread here today, then you should investigate the features and functions youneed and start a trial.It’s my hope you have a new perspective on where non-Microsoft DNS can helpyou out.Jeremy Moskowitz, Group Policy MVP9

Active Directory and Non Microsoft DNS: Facts and FictionAbout the AuthorJeremy Moskowitz is one of less than a dozen Group Policy MVPsworldwide, is the most-published author on Group Policy, and aprolific Group Policy speaker worldwide. He’s also the founder ofGPanswers.com and PolicyPak software.Since becoming one of the world's first MCSEs, he has performedActive Directory desktop implementations for some of the nation'slargest organizations.His books and articles have been read by millions and translated into multiplelanguages. Jeremy has written for Windows IT Pro Magazine, REDMONDMagazine, Microsoft Technet Magazine, Inside Technology Training Magazine,PC Magazine, and Ziff-Davis' Windows Professional Journals, among others.Jeremy has spoken at just about every existing Windows conference aboutGroup Policy, including Microsoft TechEd, Microsoft Ignite, MicrosoftManagement Summit, WinConnections, and TechMentor.Brad Rudisail is a technical specialist at GPanswers.com and PolicyPak software.He has been an MCSE since 1999 and has served as a network engineer andmanager in both the financial and education fields. He has been a leader in K12education technology and has spoken at the national K12 TechnologyConference in Washington DC and has been quoted in magazines such as T.H.E.Journal and ESchool News. He was formerly a university instructor and continuesto serve as an IT Trainer on a number of subjects. He is a professional bloggerand syndicated columnist.Jeremy Moskowitz, Group Policy MVP10

Beyond the MCSE: Active Directory for the Security .

Guide to Deploying NetScaler as an Active Directory .