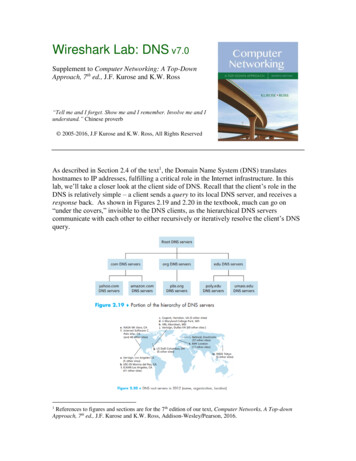 Wireshark Lab: DNS v7.0Supplement to Computer Networking: A Top-DownApproach, 7th ed., J.F. Kurose and K.W. Ross“Tell me and I forget. Show me and I remember. Involve me and Iunderstand.” Chinese proverb 2005-2016, J.F Kurose and K.W. Ross, All Rights ReservedAs described in Section 2.4 of the text1, the Domain Name System (DNS) translateshostnames to IP addresses, fulfilling a critical role in the Internet infrastructure. In thislab, we’ll take a closer look at the client side of DNS. Recall that the client’s role in theDNS is relatively simple – a client sends a query to its local DNS server, and receives aresponse back. As shown in Figures 2.19 and 2.20 in the textbook, much can go on“under the covers,” invisible to the DNS clients, as the hierarchical DNS serverscommunicate with each other to either recursively or iteratively resolve the client’s DNSquery.1References to figures and sections are for the 7th edition of our text, Computer Networks, A Top-downApproach, 7th ed., J.F. Kurose and K.W. Ross, Addison-Wesley/Pearson, 2016.

From the DNS client’s standpoint, however, the protocol is quite simple – a query isformulated to the local DNS server and a response is received from that server.Before beginning this lab, you’ll probably want to review DNS by reading Section 2.4 ofthe text. In particular, you may want to review the material on local DNS servers, DNScaching, DNS records and messages, and the TYPE field in the DNS record.[Review info included below for convince]Root DNS servers. In the Internet there are 13 root DNS servers (labeled A through Mshown in figure 2.0)A local DNS server. does not strictly belong to the hierarchy of servers but isnevertheless central to the DNS architecture. Each ISP—such as a university, anacademic department, an employee’s company, or a residential ISP—has a local DNSserver (also called a default name server).

1. nslookupIn this lab, we’ll make extensive use of the nslookup tool, which is available in mostLinux/Unix and Microsoft platforms today. To run nslookup in Linux/Unix, you just typethe nslookup command on the command line. To run it in Windows, open the CommandPrompt and run nslookup on the command line.In it is most basic operation, nslookup tool allows the host running the tool to query anyspecified DNS server for a DNS record. The queried DNS server can be a root DNSserver, a top-level-domain DNS server, an authoritative DNS server, or an intermediateDNS server (see the textbook for definitions of these terms). To accomplish this task,nslookup sends a DNS query to the specified DNS server, receives a DNS reply from thatsame DNS server, and displays the result.Notice we did not includethe wwwFigure 1 Type A and Type NS DNSlookup

MIT servers don’tsupport inversequeriesThe above screenshot shows the results of five independent nslookup commands(displayed in the Windows Command Prompt). In this example, the client host is locatedon the campus of Bridgewater Campus in Virginia, where the default local DNS server isSaturn.bridgewater.edu. When running nslookup, if no DNS server is specified, then

nslookup sends the query to the default DNS server, which in this case isSaturn.bridgewater.edu. Consider the first command:nslookup www.mit.eduIn words, this command is saying “please send me the IP address for the hostwww.mit.edu”. As shown in the screenshot, the response from this command providestwo pieces of information: (1) the name and IP address of the DNS server that providesthe answer; and (2) the answer itself, which is the host name and IP address ofwww.mit.edu. Although the response came from the local DNS server at Bridgewater, itis quite possible that this local DNS server iteratively contacted several other DNSservers to get the answer, as described in Section 2.4 of the textbook.Now consider the second command:nslookup –type NS mit.eduIn this example, we have provided the option “-type NS” and the domain “mit.edu”. Thiscauses nslookup to send a query for a type-NS record to the default local DNS server. Inwords, the query is saying, “please send me the host names of the authoritative DNS formit.edu”. (When the –type option is not used, nslookup uses the default, which is to queryfor type A records.) The answer, displayed in the above screenshot (figure 1), firstindicates the DNS server that is providing the answer (which is the default local DNSserver) along with three MIT nameservers. Each of these servers is indeed anauthoritative DNS server for the hosts on the MIT campus. However, nslookup alsoindicates that the answer is “non-authoritative,” meaning that this answer camefrom the cache of some server rather than from an authoritative MIT DNS server.Finally, the answer also includes the IP addresses of the authoritative DNS servers atMIT. (Even though the type-NS query generated by nslookup did not explicitly ask forthe IP addresses, the local DNS server returned these “for free” and nslookup displays theresult.)Now finally consider the third command:nslookup www.gmail.com Jupiter.bridgewater.eduIn this example, we indicate that we want the query sent to the DNS serverSaturn.bridgewater.edu rather than to the default DNS server (Jupiter.bridgewater.edu).Thus, the query and reply transaction takes place directly between our querying host andns1-173.mit.edu. In this example, the DNS server ns1-173.mit.edu provides the IPaddress of the host gmail.com which is a mail server for Googles GMailNow that we have gone through a few illustrative examples, you are perhaps wonderingabout the general syntax of nslookup commands. The syntax is:nslookup –option1 –option2 host-to-find dns-server

In general, nslookup can be run with zero, one, two or more options. And as we have seenin the above examples, the dns-server is optional as well; if it is not supplied, the query issent to the default local DNS server.Now that we have provided an overview of nslookup, it is time for you to test drive ityourself. Do the following (and write down the results):1. Run nslookup to obtain the IP address of a Web server in Asia. What is the IPaddress of that server?2. Run nslookup to determine the authoritative DNS servers for a university inEurope.2. ipconfigipconfig (for Windows) and ifconfig (for Linux/Unix) are among the most useful littleutilities in your host, especially for debugging network issues. Here we’ll only describeipconfig, although the Linux/Unix ifconfig is very similar. ipconfig can be used to showyour current TCP/IP information, including your address, DNS server addresses, adaptertype and so on. For example, if you all this information about your host simply byenteringipconfig \allinto the Command Prompt, as shown in the following screenshot.

ipconfig is also very useful for managing the DNS information stored in your host. InSection 2.5 we learned that a host can cache DNS records it recently obtained. To seethese cached records, after the prompt C:\ provide the following command:ipconfig /displaydnsEach entry shows the remaining Time to Live (TTL) in seconds. To clear the cache, enteripconfig /flushdnsFlushing the DNS cache clears all entries and reloads the entries from the hosts file.

3. Tracing DNS with WiresharkNow that we are familiar with nslookup and ipconfig, we’re ready to get down to someserious business. Let’s first capture the DNS packets that are generated by ordinary Websurfing activity. Use ipconfig to empty the DNS cache in your host.Open your browser and empty your browser cache. (With Internet Explorer,go to Tools menu and select Internet Options; then in the General tab selectDelete Files. You can also open your browser incognito mode. )Open Wireshark and enter “ip.addr your IP address” into the filter, whereyou obtain your IP address with ipconfig. This filter removes all packets thatneither originate nor are destined to your host.Start packet capture in Wireshark.With your browser, visit the Web page: http://www.ietf.orgStop packet capture.If you are unable to run Wireshark on a live network connection, you can download apacket trace file that was captured while following the steps above on one of the author’scomputers2.Answer the following questions. Whenever possible, when answering a question below,you should hand in a printout of the packet(s) within the trace that you used to answer thequestion asked. (Screenshots are also O.K) Annotate the printout3 to explain youranswer. To print a packet, use File- Print, choose Selected packet only, choose Packetsummary line, and select the minimum amount of packet detail that you need to answerthe question.3. Locate the DNS query and response messages. Are then sent over UDP or TCP?4. What is the destination port for the DNS query message? What is the source portof DNS response message?5. To what IP address is the DNS query message sent? Use ipconfig to determine theIP address of your local DNS server. Are these two IP addresses the same?6. Examine the DNS query message. What “Type” of DNS query is it? Does thequery message contain any “answers”?2Download the zip file traces.zipand extract the file dnsethereal-trace-1. The traces in this zip file were collected by Wireshark running on one of the author’scomputers, while performing the steps indicated in the Wireshark lab. Once you have downloaded thetrace, you can load it into Wireshark and view the trace using the File pull down menu, choosing Open, andthen selecting the dns-ethereal-trace-1 trace file.3What do we mean by “annotate”? If you hand in a paper copy, please highlight where in the printoutyou’ve found the answer and add some text (preferably with a colored pen) noting what you found in whatyou ‘ve highlight. If you hand in an electronic copy, it would be great if you could also highlight andannotate.

7. Examine the DNS response message. How many “answers” are provided? Whatdo each of these answers contain?8. Consider the subsequent TCP SYN packet sent by your host. Does the destinationIP address of the SYN packet correspond to any of the IP addresses provided inthe DNS response message?9. This web page contains images. Before retrieving each image, does your hostissue new DNS queries?Now let’s play with nslookup4. Start packet capture.Do an nslookup on www.mit.eduStop packet capture.You should get a trace that looks something like the following:4If you are unable to run Wireshark and capture a trace file, use the trace file dns-ethereal-trace-2 in thezip file traces.zip

We see from the above screenshot that nslookup actually sent five DNS queries andreceived five DNS responses. For the purpose of this assignment, in answering thefollowing questions, ignore the first two sets of queries/responses, as they are specific tonslookup and are not normally generated by standard Internet applications. You shouldinstead focus on the last query and response messages.