How Marketers Can Use Real-Time Ads To Get More Out Of . 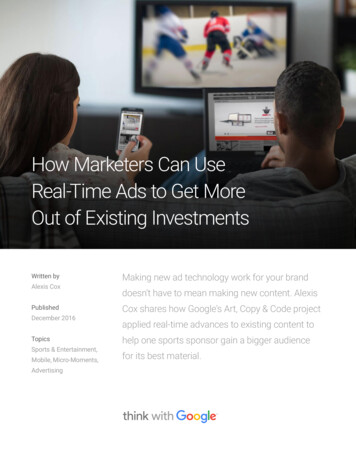 Our collective experience is defined by moments: Did you see thatgoal? Did he really say that?No one wants to miss the big moment—not fans, not brands. Andbrands should view that as an opportunity to make existing assets workharder.Immediately taking those moments that brands already have access to,repackaging them using the latest technology, and serving them to thepeople who most want to see them is a great way to get more from aninvestment. Imagine the big game-winning catch you just missed servedin an ad.At Google, part of our goal is to use new technology to design a better adexperience, so we created a prototype of instantaneous replay ads. Withthese test ads, we wanted to help brands get their best content in frontof more people. We guessed more viewers might choose to watch theads, but we wondered whether the ads would actually lead to action andbenefit the brand.To test these ideas we partnered with Rogers Communications, whichcarries National Hockey League broadcasts throughout Canada. Buildingon existing programmatic advertising technology, we created a prototypead unit that pulled highlight clips that Rogers had uploaded to YouTube.We then automatically inserted Rogers' branding and served the spots toa targeted group of fans. For this test, the ads drove users to the RogersNHL GameCentre LIVETM site, where a subscription provided access toany NHL game, even games outside fans' home viewing markets.thinkwithgoogle.com2

"These cutting-edge ads let us give users a taste of the real NHL contentthat their subscription would unlock for them," said Drew Stevenson,director of brand marketing at Rogers Communications.And fans were, well, fans of the ads. When they expanded the ad unit, theywere shown a video of a goal that just happened. They spent on average63 seconds in the ad, which was about 4X the time spent in a moretraditional expandable ad, according to Rogers.To our question about whether they would convert users, in this case,they did. Rogers saw a 30% year-over-year increase in Rogers NHLGameCentre LIVETM subscriptions during the period the ads ran.The company believes these ads contributed to driving those results,according to Helene Bahsous, brand manager at Rogers.Here are three takeaways for marketers.thinkwithgoogle.com3

1. Put your best ads to work in more placesBrands that have made big investments in entertainment or sportssponsorships should always be thinking about how to get more fromthose investments. Rogers, in this case, had the rights to broadcastfootage from NHL games. Through our partnership, the company usedthat content in ads that reached fans outside their favorite team's viewingmarket. And using DoubleClick Bid Manager, Rogers was able to targetthose ads, reaching 6.8 million fans.Marketers and brands traditionally create an ad in one medium, then onlyuse it in one channel, or think of sponsorships of TV content as needing tostay on the big screen. Marketers should take every investment and thinkof how to repurpose the best content for use on different platforms. "Forus it was about the importance of leveraging innovation and technologyto bring more relevant messages to a larger, more engaged audience.And for hockey fans, we wanted to show the ways an ad can delight," saidBahsous.2. Go everywhere your users goFor brands sponsoring events, mobile often takes a backseat. In NorthAmerica's 21.4 billion sponsorship market,1 only a small percentage isspent on digital. Marketers need a holistic approach.Eighty-four percent of smartphone and tablet users turn to their deviceswhile they're watching TV. While that might seem like a distraction, weknow that 29% are searching for information related to what they'rewatching. Less than half that amount report they're on social media.2Viewers are hungry for more information. Marketers should find ways toanticipate that need and put relevant, useful content into ads.In the case of these ads, during the final week of the campaign, Rogerssaid 20% of total online subscriptions were a direct result of theseinstantaneous replay ads.thinkwithgoogle.com4

3. Dig into cross-device performanceResults from these experimental ads showed 58% of conversions camefrom desktop and 8% from smartphones, according to Rogers. It wouldbe tempting to conclude that desktop far outperformed mobile and thatsponsors could cut back on mobile investments, but Rogers learnedthat mobile drove 23% of desktop conversions. This more precisemeasurement yielded an important insight: People used mobile to click onthe ad but then moved to their desktop to subscribe."It really was a lesson in engaging the audience on all devices, usingmobile in concert with desktop to make the most out of our sponsorshipand capture fans where they are with the moments that matter mostto them," said Stevenson. By taking traditional TV content beyond thebig screen and serving up the moments that matter in targeted ads,brands can increase engagement and make the most of their existinginvestments.Sources1 IEG Sponsorship Spending Report, 2015.2 Nielsen, The U.S. Digital Consumer, Feb. 2014.thinkwithgoogle.com5

applied real-time advances to existing content to help one sports sponsor gain a bigger audience for its best material. Written by Alexis Cox Published December 2016 Topics Sports & Entertainment, Mobile, Micro-Moments, Advertising How Marketers Can Use Real-Time Ads to Get More Out of Existing Investments

Automotive and industrial N use cases for CAN FD

2014 THE REAL WORLD OF REAL-TIME ADVERTISING

Analytics the Real World Use of Big Data - InformationWeek

Real men don't use backups, they post their the world make .

Data Use: Developing a Data Use Strategy

Can Do Descriptors - WIDA