The Continuing Denial Of Service Threat Posed By DNS 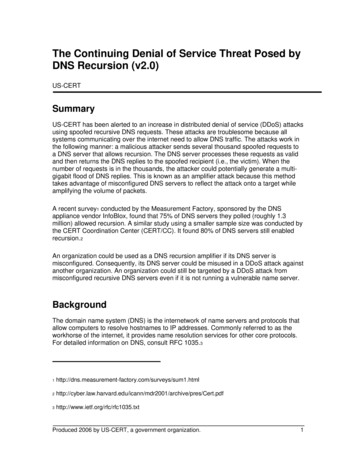 The Continuing Denial of Service Threat Posed byDNS Recursion (v2.0)US-CERTSummaryUS-CERT has been alerted to an increase in distributed denial of service (DDoS) attacksusing spoofed recursive DNS requests. These attacks are troublesome because allsystems communicating over the internet need to allow DNS traffic. The attacks work inthe following manner: a malicious attacker sends several thousand spoofed requests toa DNS server that allows recursion. The DNS server processes these requests as validand then returns the DNS replies to the spoofed recipient (i.e., the victim). When thenumber of requests is in the thousands, the attacker could potentially generate a multigigabit flood of DNS replies. This is known as an amplifier attack because this methodtakes advantage of misconfigured DNS servers to reflect the attack onto a target whileamplifying the volume of packets.A recent survey1 conducted by the Measurement Factory, sponsored by the DNSappliance vendor InfoBlox, found that 75% of DNS servers they polled (roughly 1.3million) allowed recursion. A similar study using a smaller sample size was conducted bythe CERT Coordination Center (CERT/CC). It found 80% of DNS servers still enabledrecursion.2An organization could be used as a DNS recursion amplifier if its DNS server ismisconfigured. Consequently, its DNS server could be misused in a DDoS attack againstanother organization. An organization could still be targeted by a DDoS attack frommisconfigured recursive DNS servers even if it is not running a vulnerable name server.BackgroundThe domain name system (DNS) is the internetwork of name servers and protocols thatallow computers to resolve hostnames to IP addresses. Commonly referred to as theworkhorse of the internet, it provides name resolution services for other core protocols.For detailed information on DNS, consult RFC fc1035.txtProduced 2006 by US-CERT, a government organization.1

DNS requests can be either recursive or non-recursive. A recursive DNS server processes adomain name request on a domain name for which it is not authoritative (or has not alreadycached) by querying the root name servers for the IP address of the requested domain name.The root name server will then “delegate” the query to the appropriate top level domain (TLD)server (.com, .org, .net, etc.), which in turn delegates to the authoritative nameserver for thedomain in question. A non-recursive server only provides the information it has availablelocally. However, depending on its configuration, it may also return delegation information forthe requested domain.Potential Targets and RisksAny system configured to provide DNS recursion is susceptible to this attack, including Windows systems running Domain Name Services Unix systems running Domain Name Services (BIND) DNS appliances (Infoblox, MiningWorks, BlueCat) Apple Macintosh OS X. Recursion cannot be filtered in the DNS implementationshipped with Macintosh OS X 10.3.x Any device capable of proxying DNS lookups recursively, such as customer premisesequipment (CPE)In addition, the inbound network transport infrastructure is put at risk during such an attackbecause of the volume of traffic generated.A DNS recursion attack is essentially an amplification DoS attack. Therefore, the attack affectsmultiple impact points: DNS servers configured to provide recursion receive the spoofed requests andgenerate replies to the spoofed address (i.e., the victim). The performance of thesesystems may be negatively affected when processing the spoofed requests. The spoofed DNS requests query the root name servers, part of the internet’s criticalinfrastructure, indirectly affecting them. The traffic then traverses the internet backbone, affecting the internet service providerand any upstream providers until it reaches the intended target. The intended target receives large amounts of inbound DNS replies that could consumeall available resources on its router, depending on available bandwidth. Even if thetraffic is reduced through rate limiting or other bandwidth throttling measures, the attackcould impact other legitimate business along the path of the attack.Produced 2006 by US-CERT, a government organization.2

What can I do to protect my DNS servers from abuse?Typically, DNS servers only provide DNS services to machines within a trusted domain.Restricting recursion and disabling the ability to send additional delegation information can helpprevent DNS-based DoS attacks and cache poisoning. It can also improve performance onyour network by reducing the vulnerability of your DNS servers to use as a reflector in such anattack. The following sections provide guidance on mitigating this threat.Follow Security Best Practices for Configuring DNSFor additional information on secure DNS practices, see the “Resources” section of this paper.MicrosoftServer 2003Consult Microsoft’s Securing DNS for Windows 4da0-9c6f-2bb0ae9ca7e9.mspxWindows 2000Consult the Windows 2000 Secure DNS Configuration -6.pdfUnixThe Berkeley internet Name Domain (BIND) server is distributed with most UNIX variants andprovides name services to many networks. BIND, however, has a number of vulnerabilities thatcan, among other things, allow it to be exploited to launch DoS attacks. Team Cymru’s SecureBIND Template provides guidance on securing BIND from such abuse. The template isavailable at the following plate.htmlTeam Cymru also provides templates for additional border protection: the Secure IOSTemplate and the Secure BGP Template.Disable Recursive DNSProduced 2006 by US-CERT, a government organization.3

Consult the following documentation to learn about disabling recursive DNS in yourenvironment.MicrosoftServer 2003Information on how to disable recursive queries on the DNS server can be found at thefollowing 4ae-ac82-8e76d19d9c37.mspxInstructions taken from the above URL have been provided here. Screen shots havealso been provided for illustrative purposes.To disable recursion using the Windows interface: Open the DNS snap-in (To open the DNS snap-in, click Start, point to AdministrativeTools, and then click DNS). In the console tree, right-click the applicable DNS server, then click Properties:Produced 2006 by US-CERT, a government organization.4

Windows 2000Information on how to disable recursive queries on the DNS server can be found at thefollowing ed/help/default.asp?url /windows2000/en/advanced/help/sag DNS imp ModifyServerDefaults.htmInstructions taken from the above URL have been provided here.To disable recursion on the DNS server Open DNS (click Start, point to Programs, point to Administrative Tools, andthen click DNS). In the console tree, click the applicable DNS server. On the Action menu, click Properties. Click the Advanced tab. In Server options, select the Disable recursion check box, and then click OK.UnixFor information on disabling recursive DNS on Unix systems, see Team Cymru’s BINDTemplate (noted above).In the current version of BIND, DNS recursion is enabled by default. Internet SystemsConsortium (ISC) has agreed to disable recursion by default in the next release of BIND. Forcurrent versions of BIND, these instructions, taken from Team Cymru’s BIND d-template.html) are provided for disablingrecursion.// Create a view for external DNS clients.view "external-in" in {// Our external (untrusted) view. We permit any client to access// portions of this view. We do not perform recursion or cache// access for hosts using this view.match-clients { any; };recursion no;additional-from-auth no;additional-from-cache no;// Link in our zoneszone "." in {type hint;Produced 2006 by US-CERT, a government organization.7

file "db.cache";};zone "ournetwork.net" in {type master;file "master/db.ournetwork";allow-query {any;};};zone "8.8.8.in-addr.arpa" in {type master;file "master/db.8.8.8";allow-query {any;};};};Test your existing configurationThe Measurement Factory web site provides pointers to a number of third-party tools availablefor validating DNS. The list is available at the following -party-validation-tools/ConclusionWhere possible, organizations should secure their DNS servers to ensure that they do notallow recursion or, at a minimum, restrict access to only trusted domains and disable the abilityto send additional delegation information.Produced 2006 by US-CERT, a government organization.8

a DNS server that allows recursion. The DNS server processes these requests as valid and then returns the DNS replies to the spoofed recipient (i.e., the victim). When the number of requests is in the thousands, the attacker could potentially generate a multi-gigabit flood of DNS replies.

Connecting the Dots How Many Denials Walking Do You