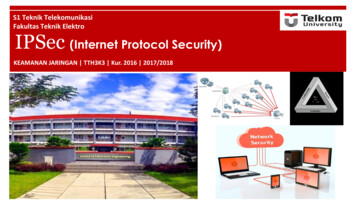 Encapsulation vs Tunneling Encapsulation: A packet is encapsulated into the payload of a lower layerpacket; a new header is added at the lower layer. Source: http://en.wikipedia.org/wiki/TCP IP4

Encapsulation vs Tunneling Tunneling: A packet (the payload protocol) is encapsulated intoanother protocol at the same or higher layer (the deliveryprotocol).– Example: A IP packet is encapsulated into a IPsec packet. Tunneling can be used to circumvent a firewall policy(http://en.wikipedia.org/wiki/Tunneling protocol)– Example: HTTP can be used to tunnel a protocol that would otherwise beblocked by the firewall.5

Benefits of IPSec Some of the benefits of IPsec:– When IPsec is implemented in a firewall or router, it provides strong security thatcan be applied to all traffic crossing the perimeter Traffic within a company or workgroup does not incur the overhead of security-relatedprocessing– IPsec in a firewall is resistant to bypass if all traffic from the outside must use IPand the firewall is the only means of entrance from the Internet into theorganization– IPsec is below the transport layer (TCP, UDP) and so is transparent to applications There is no need to change software on a user or server system when IPsec is implemented inthe firewall or router– IPsec can be transparent to end users There is no need to train users on security mechanisms, issue keying material on a per-userbasis, or revoke keying material when users leave the organization– IPsec can provide security for individual users if needed This is useful for offsite workers and for setting up a secure virtual subnetwork within anorganization for sensitive applications

Transport and Tunnel ModesTransport Mode Provides protection primarily forupper-layer protocols– Examples include a TCP or UDPsegment or an ICMP packet Typically used for end-to-endcommunication between two hosts ESP in transport mode encrypts andoptionally authenticates the IPpayload but not the IP header AH in transport mode authenticatesthe IP payload and selectedportions of the IP headerTunnel Mode Provides protection to the entire IPpacket Used when one or both ends of a securityassociation (SA) are a security gateway A number of hosts on networks behindfirewalls may engage in securecommunications without implementingIPsec ESP in tunnel mode encrypts andoptionally authenticates the entire innerIP packet, including the inner IP header AH in tunnel mode authenticates theentire inner IP packet and selectedportions of the outer IP header

Transport & Tunnel Mode In transport mode, IPSec protectswhat is delivered from the transportlayer to the network layer. In tunnel mode, IPSec protects theentire IP packet. It takes an IPpacket, including the header, appliesIPSec security methods to the entirepacket, and then adds a new IPheader

Encapsulating Security Payload (ESP) Used to encrypt the Payload Data, Padding, Pad Length, and Next Header fields– If the algorithm requires cryptographic synchronization data then these data may be carriedexplicitly at the beginning of the Payload Data field An optional ICV field is present only if the integrity service is selected and is providedby either a separate integrity algorithm or a combined mode algorithm that uses an ICV– ICV is computed after the encryption is performed– This order of processing facilitates reducing the impact of DoS attacks– Because the ICV is not protected by encryption, a keyed integrity algorithm must beemployed to compute the ICV The Padding field serves several purposes:– If an encryption algorithm requires the plaintext to be a multiple of some number of bytes,the Padding field is used to expand the plaintext to the required length– Used to assure alignment of Pad Length and Next Header fields– Additional padding may be added to provide partial traffic-flow confidentiality by concealingthe actual length of the payload

Anti Replay Mechanism ESP A replay attack is one inwhich an attacker obtains acopy of an authenticatedpacket and later transmits it tothe intended destination. The receipt of duplicate,authenticated IP packets maydisrupt service in some way ormay have some otherundesired consequence.

IP Secuirty Policy Fundamental to the operation of IPsec is the concept of asecurity policy applied to each IP packet that transits froma source to a destination. IPsec policy is determined primarily by the interaction oftwo databases,– the security association database (SAD)– security policy database (SPD) .

Security Policy Database (SPD) Defines the type of security applied to a packet .– Security Policy Database (SPD)one for Outbound SP, one for Inbound SP– Contains entries, each of which defines a subset of IP traffic and points toan SA for that traffic In more complex environments, there may be multiple entries thatpotentially relate to a single SA or multiple SAs associated with asingle SPD entry– Each SPD entry is defined by a set of IP and upper-layer protocol fieldvalues called selectors– These are used to filter outgoing traffic in order to map it into a particularSA

IP Traffic Processing IPsec is executed on a packet-by-packet basis If IPsec is implemented, each outbound IP packet is processed bythe IPsec logic before transmission Each inbound packet is processed by the IPsec logic after receptionand before passing the packet contents on to the next higher layer(e.g., TCP or UDP). There are two processing model in IP Sec:– Outbound Packet– Inbound Packet

Combining Security Associations An individual SA can implement either the AH or ESP protocol but not both Security association bundle– Refers to a sequence of SAs through which traffic must be processed to provide adesired set of IPsec services– The SAs in a bundle may terminate at different endpoints or at the same endpoint May be combined into bundles in two ways:TransportadjacencyIterated tunneling Refers to applying more than one security protocol to thesame IP packet without invoking tunneling This approach allows for only one level of combination Refers to the application of multiple layers of securityprotocols effected through IP tunneling This approach allows for multiple levels of nesting

Transport Adjacency Another way to apply authentication after encryption is touse two bundled transport SAs, with the inner being anESP SA and the outer being an AH SA– In this case ESP is used without its authentication option– Encryption is applied to the IP payload– AH is then applied in transport mode– Advantage of this approach is that the authentication coversmore fields– Disadvantage is the overhead of two SAs versus one SA

Transport-Tunnel Bundle The use of authentication priorto encryption might bepreferable for several reasons:– It is impossible for anyone tointercept the message and alter theauthentication data withoutdetection– It may be desirable to store theauthentication information with themessage at the destination for laterreference One approach is to use a bundleconsisting of an inner AHtransport SA and an outer ESPtunnel SA– Authentication is applied to the IPpayload plus the IP header– The resulting IP packet is thenprocessed in tunnel mode by ESP The result is that the entireauthenticated inner packet isencrypted and a new outer IP headeris added

Internet Key Exchange The key management portion of IPsec involves the determination anddistribution of secret keys– A typical requirement is four keys for communication between two applications Transmit and receive pairs for both integrity and confidentiality The IPsec Architecture document mandates support for two types of keymanagement: A system administratormanually configures eachsystem with its own keys andwith the keys of othercommunicating systems This is practical for small,relatively static environmentsManualAutomated Enables the on-demandcreation of keys for SAs andfacilitates the use of keys in alarge distributed system withan evolving configuration

ISAKMP/Oakley The default automated key management protocol of IPsec Consists of:– Oakley Key Determination Protocol A key exchange protocol based on the Diffie-Hellman algorithm but providingadded security Generic in that it does not dictate specific formats– Internet Security Association and Key Management Protocol(ISAKMP) Provides a framework for Internet key management and provides the specificprotocol support, including formats, for negotiation of security attributes Consists of a set of message types that enable the use of a variety of keyexchange algorithms

IKE Phase 1 Two modes: main mode aggressive mode Four Authentication methods: Pre-shared keys Digital signatures Public key encryption Revised public key encryption Agreeing on a set of parameters that are to be used to authenticate the two peers Agreeing on parameters used to encrypt a portion of the main mode and all of the quick mode messages None of the aggressive mode messages are encrypted Authenticate the two peers to each other Generate keys used to generate keying material for subsequent encryption of data All of the parameters negotiated and the keys used to generate keys for encryption are stored as IKE or ISAKMPsecurity association (SA

IKE Phase 2 One mode: Quick mode Involves exchange of 3 messages To have two peers agree on a set of attributes for creating the IPsec security associations that could beused by ESP to encrypt the data To redo Diffie-Hellman (DH) exchange so that new keying material can be used to generate IPsecencryption keys Negotiate parameters of IPsec SA Perfect Forward Secrecy (PFS) may be used by initiator to request that a new DH secret be generated overan encrypted channel New nonces generated: Ni and Nr New DH public values: Xa ga mod p Xb gb mod p