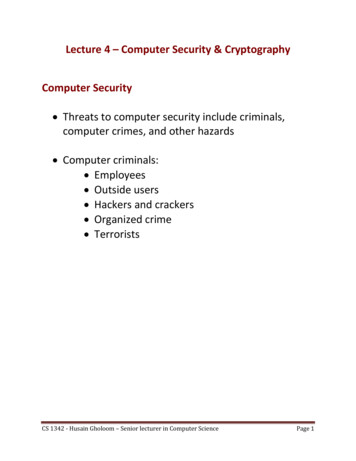 Computer Crimes have tripled in the past two years! Malicious Programs such as Viruses Internet scams, such as phishing Social networking risks Rogue Wi-Fi hotspots Data manipulation such as Computer FraudOther Hazards Natural hazards such as fires, floods, and tornadoes Civil strife and terrorism such as Wars, riots, and terroristactivities Technological failures such as Voltage surge or spikeCS 1342 - Husain Gholoom – Senior lecturer in Computer SciencePage 2

Open ended Questions : What is a copyright? What is plagiarism? Discuss how computers makeplagiarism easy and tempting to busy people and how aplagiarist can be easily identified.CS 1342 - Husain Gholoom – Senior lecturer in Computer SciencePage 7

Artificial Intelligence ( AI ) and Social Issues /Artificial Intelligence ( AI )Thinking Machines A computer can do some things better - and certainly faster - than a human canAdding a thousand four-digit numbersCounting the distribution of letters in a bookSearching a list of 1,000,000 numbers for duplicatesMatching finger printsBUT a computer would havedifficulty pointing out the cat inthis picture, which is easy for a humanHumans do bestComputers do bestCan you count theCan you list the itemsin this picture?distribution of letters in abook?Add a thousand4-digitnumbers?Match finger prints?Search a list of a millionvaluesfor duplicates? Artificial intelligence (AI) The study of computer systems that attempt to model andapply the intelligence of the human mindCS 1342 - Husain Gholoom – Senior lecturer in Computer SciencePage 8

The Turing TestIn 1950 English mathematician Alan Turing wrote a landmark paper that asked the question:Can machines think?How will we know when we’ve succeeded?The Turing TestIn a Turing test, theinterrogator mustdetermine whichrespondent is thecomputer and whichis the humanThe Turing test is used to empirically determine whether a computer has achieved intelligence Weak equivalence Two systems (human and computer) are equivalent in results(output), but they do not arrive at those results in the same wayStrong equivalence Two systems (human and computer) use the same internalprocesses to produce resultsCS 1342 - Husain Gholoom – Senior lecturer in Computer SciencePage 9

Expert Systems Expert system A software system based the knowledge of human experts in aspecialized fieldo An expert system uses a set of rules to guide its processingo The inference engine is the part of the software that determines how the rulesare followedExample: What type of treatment should I put on my lawn? NONE—apply no treatment at this timeTURF—apply a turf-building treatmentWEED—apply a weed-killing treatmentBUG—apply a bug-killing treatmentFEED—apply a basic fertilizer treatmentWEEDFEED—apply a weed-killing and fertilizer combination treatmentAn execution of our inference engine System: Does the lawn have large, bare areas?User: NoSystem: Does the lawn show evidence of bugs?User: NoSystem: Is the lawn generally thin?User: YesSystem: Does the lawn contain significant weeds?User: YesSystem: You should apply a weed-killing and fertilizer combination treatment.CS 1342 - Husain Gholoom – Senior lecturer in Computer SciencePage 10

Limitations of Computing & Ethical Issues The computer can outperform human beings in speed, memory , repetitionand accuracy. A computer can process data faster than any other machine designed to performa similar task. It has memory. It has the capacity to remember what it has done. It can storeinstructions in its memory and follow these through unaided. A computer can tirelessly perform the same operations millions of times inexactly the same way without getting bored and tired the way a human clerkwould. A computer's high-speed processing is accompanied by high-accuracy results.No other system can have as much accuracy as a computer system.Blame it on the Computer : The computer has done this and that. Actually this isnot the computer which has done this but the user. Despite its various features, acomputer does have the following limitations:a. No Self IntelligenceToday, a computer is able to do a work which is impossible for man.Computers are used to do risky and dangerous work and where sharpactually is needed. But it does not have any intelligence of its own. It worksaccording to the instruction only.b. No Decision-Making powerThe computer cannot take any decision of its own. It does only those tasks whichare already instructed to it.CS 1342 - Husain Gholoom – Senior lecturer in Computer SciencePage 12

c. No learning powerThe computer has no learning power. Once you give instructions to a computerhow to perform a task, the very task is cannot perform if you do not give it anyinstructions for the next time. For example, when you are taught how to solve aproblem and it same type of problem is given to you to solve, then you can do itbecause you have learned how to solve the problem.However, they do not have common sense. We can't teach it to think morally orethically. It just does what we tell it to do. They will never experience humanemotions or concepts.it will only provide us the foundation and software toallow us to enter them into its system, but they will not process it like humans do.Its limitations is how much data we put into it. How much memory it has. Its lifeexpectancy is how long the hardware survives. They get replaced easily becauseas the years passes, the technology and components get better. Their limitationsis how we built them.d. Programmed by Humans:Though the computer is programmed to work efficiently, fast and accurately but itis programmed by human beings to do so. Without a program, a computer isnothing. A program is a set of instructions. Computer only follows theseinstructions. If the instructions are not accurate the working of the computer willnot accurate as well .e. Thinking:The computer can not think itself. The concept of artificial intelligence shows thatthe computer can think. But still this concept is dependent on a set of instructionsprovided by the human beings.CS 1342 - Husain Gholoom – Senior lecturer in Computer SciencePage 13

Ethical IssuesDigital Divide What is it? How does it affect you? What is the One Laptop per Child initiative?o Why are developing countries at such a disadvantage? How do smartphones relate to the issue? The term 'digital divide' describes the fact that the world can bedivided into people who do and people who don't have access to- and the capability to use - modern information technology,such as the telephone, television, or the Internet.The digital divide exists between those in cities and those in ruralareas. For example, a 1999 study showed that 86% of Internetdelivery was to the 20 largest cities. The digital divide also existsbetween the educated and the uneducated, between economicclasses, and, globally, between the more and less industriallydeveloped nations.CS 1342 - Husain Gholoom – Senior lecturer in Computer SciencePage 15

Encryption is the process of coding information to make it unreadable, except to those who have the key E-mail encryption File encryption Web site encryption Virtual private networks (VPNs) Wireless network encry

An Implementation Of Elliptic Curve Cryptography

Elliptic curves over nite elds and applications to .