THE CHALLENGE OF LOCAL GOVERNMENT FINANCING IN 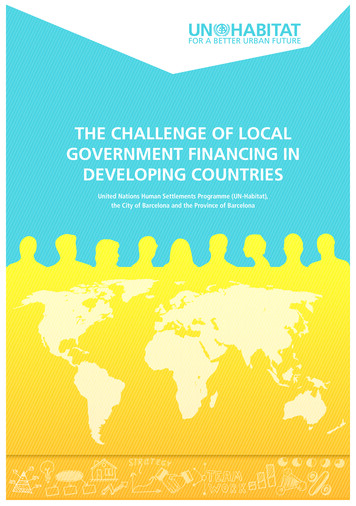 THE CHALLENGE OF LOCALGOVERNMENT FINANCING INDEVELOPING COUNTRIESUnited Nations Human Settlements Programme (UN-Habitat),the City of Barcelona and the Province of Barcelona

THE CHALLENGE OF LOCAL GOVERNMENTFINANCING IN DEVELOPING COUNTRIESThe Challenge of Local Government Financing in Developing CountriesFirst published in Nairobi in 2015 by UN-HABITAT.Copyright United Nations Human Settlements Programme 2015All rights reserved United Nations Human Settlements Programme (UN-HABITAT)P. O. Box 30030, 00100 Nairobi GPO KENYATel: 254-020-7623120 (Central Office)www.unhabitat.orgHS Number: HS/031/15EISBN Number:(Volume) 978-92-1-132653-6Disclaimer: The designations employed and the presentation of the material in this publication do not imply the expression ofany opinion whatsoever on the part of the Secretariat of the United Nations concerning the legal status of any country, territory,city or area or of its authorities, or concerning the delimitation of its frontiers of boundaries. Views expressed in this publicationdo not necessarily reflect those of the United Nations Human Settlements Programme, the United Nations, or its MemberStates. Excerpts may be reproduced without authorization, on condition that the source is indicated.AcknowledgementsUN-Habitat gratefully acknowledges the City of Barcelona and the Provincial Government of Barcelona, Spain for financialsupport and collaboration.UN-Habitat is thankful to the following individuals for preparing the background papers for the report: Jorge MartinezVazquez, Georgia State University, USA; Paul Smoke, New York University, USA; Enid Slack, University of Toronto, Canada;and William F. Fox, University of Tennessee, USA.Carmen Sanchez Miranda, Head, UN-Habitat Office in Spain and the UN-Habitat team in Madrid are gratefully acknowledgedfor their valuable contributions. The report was compiled by Ananda Weliwita and Imogen Howells under the overall guidanceof Gulelat Kebede, Coordinator of the Urban Economy Branch of UN-Habitat.3

4THE CHALLENGE OF LOCAL GOVERNMENTFINANCING IN DEVELOPING COUNTRIESFOREWORDCities are assets, solutions and drivers of economic and social development. Cities possess huge untappedeconomic potential that can and should be leveraged to create wealth and economic opportunities for all. Thisrequires good urban planning that supports urban compactness, integration, and connectivity. However, eventhe best urban plans risk ending up unused if they are not accompanied by financial and regulatory strategiesfor implementation. Strategic public investments must go hand in hand with strategic funding mechanisms andsupporting governance systems.Currently, many local governments in developing countries face the near-impossible task of funding theinfrastructure and services required to meet the basic needs of growing urban populations, while forward-lookingcapital investments are not possible for financial reasons. Local financial management frequently suffers fromlacking technological infrastructure and capacity, and opportunities for revenue generation are often restricted byinadequate regulatory frameworks or disadvantageous political structures. Lagging public-sector spending takes atoll on urban efficiency and local economic activity, creating a vicious cycle of budgetary shortfalls, choking urbanconditions, and economic stagnation.However, strategic governance and financing systems can provide hope for struggling local governments.There are opportunities for matching local needs with institutional frameworks and revenue-generation tools.Appropriate financial management can tap into strategies that improve efficiency of revenue collection, winpublic support, capitalize on urban and regional economies of scale, curb land speculation and sprawl, incentivizeeconomic activity, and improve urban affordability for the poor. The resulting budgetary improvements canallow municipalities to make strategic investments in their cities, stimulating a virtuous cycle of growth, revenuegeneration, and prosperity.This report – an outcome of an expert group meeting held on the challenge of local government financing indeveloping countries – documents both the challenges and solutions related to the ability of local governments tomobilize revenues from local resources. The report also identifies successful governance mechanisms for efficientand equitable provision of public services in metropolitan areas of developing countries, and shares experiencesand methods to making public service provision more viable in peri-urban areas of large cities and in smaller urbancentres of these countries.Dr. Joan ClosExecutive Director of UN-Habitat

8THE CHALLENGE OF LOCAL GOVERNMENTFINANCING IN DEVELOPING COUNTRIESINTRODUCTIONLocal authorities in all parts of the world play an increasinglyimportant role in the delivery of fundamental basic publicservices. But authorities also face great challenges. Most localauthorities in developing countries are facing increasingly biggerchallenges as a result of rapid and chaotic urbanization and dueto the impacts of frequent natural disasters caused by climatechange. The recent global financial and economic crisis hasfurther aggravated these challenges.In addition to addressing vertical fiscal imbalances, two otherimportant factors could significantly contribute to a moreefficient and equitable delivery of public services: (a) introducingmore responsive and accountable governance practices and (b)ensuring that public service provision becomes more viable inperi-urban areas and smaller cities and towns.The fundamental problem confronting most local authorities,especially those managing cities in developing countries, is thewidening gap between the availability of financial resources andmunicipal spending needs. One of the main reasons for thisincreasing fiscal gap is the rapid growth of urban populations,which creates an ever-increasing demand for public services, newpublic infrastructure, and its maintenance.Cities are assets, solutions and driversof economic and social development.Most cities in developing countries depend mostly on centralgovernment transfers, with lesser revenues derived from propertytaxation and service charges. The more lucrative sources ofrevenue potentially suitable for financing urban areas, such asincome taxes, sales taxes, and business taxes, continue to becontrolled by the central governments. Where local authoritiesare able to derive revenues from property taxes and servicecharges, meaningful tax increases are sometimes refused ordelayed by central governments for fear of eroding politicalsupport from the urban population; or even rejected by the localauthorities themselves for fear of political backlash from localtaxpayers. In most countries, there are huge vertical imbalancesat the subnational level in terms of sharing responsibilitiesand available fiscal resources. Stated differently, many centralgovernments refuse to pay the political and financial costs of thedecentralization of roles and responsibilities.With contributions by Jorge Martinez-Vasquez, Gulelat Kebede and Ananda WeliwitaUN-Habitat, with the financial support of the Barcelona CityCouncil, held an Expert Group Meeting (EGM) on 25 and26 June 2014 in Barcelona to review the conventional wisdomand practices, and identify gaps, policy options, and capacityissues relevant to addressing the challenges mentioned above.The overall purpose of the EGM was to better understandthe key elements and processes needed for local authorities toeffectively use various financing mechanisms to implement cityextension plans and urban development projects. While theseplans and projects are urgently needed to accommodate growingurban populations, they cannot succeed without the backing offinancial and regulatory strategies.Some 40 experts and practitioners, including local governmentofficials, participated at the conference. The conference wasorganized around four themes: (a) Political economy challengesfacing urban authorities in generating revenues from within,and solutions to these challenges; (b) Challenges in the use ofvarious mechanisms for mobilizing financial resources for urban

THE CHALLENGE OF LOCAL GOVERNMENTFINANCING IN DEVELOPING COUNTRIESdevelopment and solutions to these challenges; (c) Innovativegovernance mechanisms and institutions to support the efficientand equitable provision of public services in metropolitanareas; (d) Public service provision in peri-urban areas and smalltowns in developing countries. Each of the four themes was firstintroduced by a formal presentation by international expertsand then followed by discussion of several case studies withparticipation of the entire audience. The experience of the Cityof Barcelona spanning over the past 30 years was included amongthe presented cases. This report presents the four papers that wereprepared to frame and guide the discussion on the four themes.The report closes with a summary of the key messages in each ofthe four thematic papers.Back to basics: Understandingrevenue sources and assignments,and the reform processFor a viable and responsible fiscal future, cities in developingcountries must make use of significant sources of tax revenuesas well as non-tax revenues collected through user charges andfees. Sufficiency of own revenues is the key to a city’s improvedability to deliver necessary goods and services and to betteraccountability of local officials to their constituents. Ownrevenues should be complemented by intergovernmentaltransfers to address differences in expenditure needs andfiscal capacity across cities; and also for cities to support theimplementation of central government programmes. In order toeffectively address the challenge of mobilizing adequate financialresources, urban authorities in developing countries shouldconsider using mechanisms such as municipal bonds, bank loans,municipal development funds, funds from institutional investors(such as pension funds), corporate bonds, equity markets andpublic–private partnerships (PPP).9Borrowing from capital markets is an alternative way tomobilize financial resources for municipalities. Yet in order toborrow, cities must first demonstrate that they are creditworthy.Creditworthiness is the determining factor used by investorsand banks to assess the risks involved in lending to municipalgovernments. A municipality’s creditworthiness dependsessentially on the availability of sufficient own revenues and onthe stability, predictability and unconditionality of (at least some)intergovernmental grants.The paper on Mobilizing financial resources for public servicedelivery and urban development, prepared and presented byProfessor Jorge Martinez-Vazquez, provides an overview of bothconventional and new sources of local government financing,concentrates on the important role of charges and fees indeveloping countries’ city budgets, and addresses questions suchas: what are the most suitable sources of tax revenue for cities indeveloping countries? What charges and fees can increase tobecome a more meaningful part of city budgets in developingcountries? What are the ideal properties of intergovernmentaltransfers to facilitate revenue autonomy and financial adequacyof cities? What are some of the mechanisms available for citiesto access private sector capital and other external sources offinance, to allow implementation of their urban developmentand infrastructure plans? What can be done to facilitateborrowing from capital markets by urban authorities? What arethe necessary institutional and legal reforms?By providing a snapshot of the available tax and non-tax sources,transfers, grants and borrowings, the paper builds a commonunderstanding of the principles, finance instruments, and reformprocesses relevant to enhancing the local revenue and financeconditions of cities in developing countries.Local authorities in all parts of the world play an increasingly importantrole in the delivery of fundamental basic public services. But authoritiesalso face great challenges.

10THE CHALLENGE OF LOCAL GOVERNMENTFINANCING IN DEVELOPING COUNTRIESThe dynamics of political economy:A key condition determining thesuccess of reformReforming municipal finance is not easy. Perhaps the mostsignificant challenges facing financing of urban authorities indeveloping countries are related to political economy issues.These issues are critical to understanding the consistent refusalof the central government authorities to decentralize significanttax revenues, as well as the common refusal of local authorities toadequately use the tax revenue authority they are granted.For a viable and responsible fiscalfuture, cities in developing countriesmust make use of significant sources oftax revenues as well as non-tax revenuescollected through user charg

The Challenge of Cultural Relativism

Decoupling governance and democracy: The challenge of .