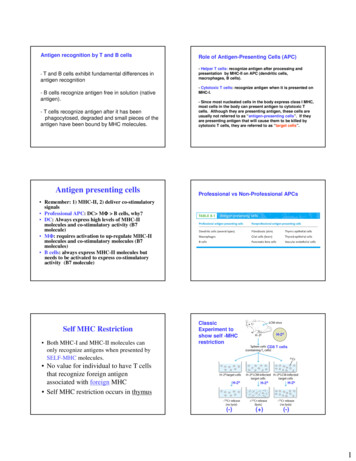 Antigen recognition by T and B cellsRole of Antigen-Presenting Cells (APC)- T and B cells exhibit fundamental differences in- Helper T cells: recognize antigen after processing andpresentation by MHC-II on APC (dendritic cells,macrophages, B cells).antigen recognition- B cells recognize antigen free in solution (nativeantigen).- T cells recognize antigen after it has beenphagocytosed, degraded and small pieces of theantigen have been bound by MHC molecules.Antigen presenting cells- Cytotoxic T cells: recognize antigen when it is presented onMHC-I.- Since most nucleated cells in the body express class I MHC,most cells in the body can present antigen to cytotoxic Tcells. Although they are presenting antigen, these cells areusually not referred to as “antigen-presenting cells”. If theyare presenting antigen that will cause them to be killed bycytotoxic T cells, they are referred to as “target cells”.Professional vs Non-Professional APCs Remember: 1) MHC-II, 2) deliver co-stimulatorysignals Professional APC: DC MΦΦ B cells, why? DC: Always express high levels of MHC-IImolecules and co-stimulatory activity (B7molecule) MΦΦ: requires activation to up-regulate MHC-IImolecules and co-stimulatory molecules (B7molecules) B cells: always express MHC-II molecules butneeds to be activated to express co-stimulatoryactivity (B7 molecule)Self MHC Restriction Both MHC-I and MHC-II molecules canonly recognize antigens when presented bySELF-MHC molecules.ClassicExperiment toshow self -MHCrestrictionH-2KCD8 T cells No value for individual to have T cellsthat recognize foreign antigenassociated with foreign MHC Self MHC restriction occurs in thymusH-2K(-)H-2K( )H-2b(-)1

The role of the TAP (Transporter associated with Antigenic Processing). - Peptides from proteasome degradation of cytoplasmic proteins are transported across the membrane of the rough endoplasmic reticulum by a heterodimeric protein designated as TAP.-TAP is composed of two subunits - TAP1 and TAP-2 -

THE BASICS OF USING SPSS - NAU

A JOURNEY THROUGH THE CELL PART ONE—CELLS: AN

CHARACTERISTICS OF PROKARYOTIC AND EUKARYOTIC CELLS

Play and its role in the mental development of the child