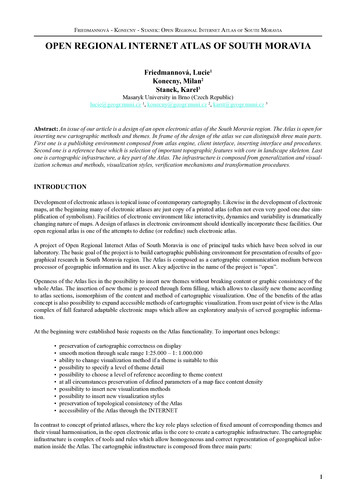 FRIEDMANNOVÁ - KONECNY - STANEK: OPEN REGIONAL INTERNET ATLAS OF SOUTH MORAVIAOPEN REGIONAL INTERNET ATLAS OF SOUTH MORAVIAFriedmannová, Lucie1Konecny, Milan2Stanek, Karel3Masaryk University in Brno (Czech Republic)[email protected] 1, [email protected] 2, [email protected] 3Abstract: An issue of our article is a design of an open electronic atlas of the South Moravia region. The Atlas is open forinserting new cartographic methods and themes. In frame of the design of the atlas we can distinguish three main parts.First one is a publishing environment composed from atlas engine, client interface, inserting interface and procedures.Second one is a reference base which is selection of important topographic features with core in landscape skeleton. Lastone is cartographic infrastructure, a key part of the Atlas. The infrastructure is composed from generalization and visualization schemas and methods, visualization styles, veriﬁcation mechanisms and transformation procedures.INTRODUCTIONDevelopment of electronic atlases is topical issue of contemporary cartography. Likewise in the development of electronicmaps, at the beginning many of electronic atlases are just copy of a printed atlas (often not even very good one due simpliﬁcation of symbolism). Facilities of electronic environment like interactivity, dynamics and variability is dramaticallychanging nature of maps. A design of atlases in electronic environment should identically incorporate these facilities. Ouropen regional atlas is one of the attempts to deﬁne (or redeﬁne) such electronic atlas.A project of Open Regional Internet Atlas of South Moravia is one of principal tasks which have been solved in ourlaboratory. The basic goal of the project is to build cartographic publishing environment for presentation of results of geographical research in South Moravia region. The Atlas is composed as a cartographic communication medium betweenprocessor of geographic information and its user. A key adjective in the name of the project is “open”.Openness of the Atlas lies in the possibility to insert new themes without breaking content or graphic consistency of thewhole Atlas. The insertion of new theme is proceed through form ﬁlling, which allows to classify new theme accordingto atlas sections, isomorphism of the content and method of cartographic visualization. One of the beneﬁts of the atlasconcept is also possibility to expand accessible methods of cartographic visualization. From user point of view is the Atlascomplex of full featured adaptable electronic maps which allow an exploratory analysis of served geographic information.At the beginning were established basic requests on the Atlas functionality. To important ones belongs: preservation of cartographic correctness on displaysmooth motion through scale range 1:25.000 – 1: 1.000.000ability to change visualization method if a theme is suitable to thispossibility to specify a level of theme detailpossibility to choose a level of reference according to theme contextat all circumstances preservation of deﬁned parameters of a map face content densitypossibility to insert new visualization methodspossibility to insert new visualization stylespreservation of topological consistency of the Atlasaccessibility of the Atlas through the INTERNETIn contrast to concept of printed atlases, where the key role plays selection of ﬁxed amount of corresponding themes andtheir visual harmonisation, in the open electronic atlas is the core to create a cartographic infrastructure. The cartographicinfrastructure is complex of tools and rules which allow homogeneous and correct representation of geographical information inside the Atlas. The cartographic infrastructure is composed from three main parts:1

FRIEDMANNOVÁ - KONECNY - STANEK: OPEN REGIONAL INTERNET ATLAS OF SOUTH MORAVIA publication environment reference base visualisation and generalisation schemasPUBLICATION ENVIRONMENTThe publication environment basically represents technological background of the Atlas. The environment is composedfrom an atlas engine and client applications for users and for processors. Within implementation process of the environment we have used open standards and open source software components. One part of the environment is non-technological – insertion procedures.The atlas engineA basic part of the atlas engine is a database engine. We have tested and are still testing various alternatives from opensource software for implementation of the atlas database management. The atlas database is composed from various features – geodata, symbols, rules, code components. Nowadays we use solution based on two database engines – MySQLfor storage of geodata, and eXist for rest of features. Both engines are, of course, open source software. MySQL is arelational database engine with support for geodata types based on OGC simple feature recommendation (this support isnowadays limited on possibility to store geometry and use spatial predicates in queries). eXist is a simple native XMLdatabase engine. This engine is suitable to our purposes because of usage of XML notation for majority of atlas features.In the framework of the Atlas is W3 consortium standard SVG the most important XML namespace. The eXist is relatedto http server engine Jetty. This simple web server we use for communication between client and server part of the atlasengine.The core of the atlas engine is a map compiler. The map compiler retrieve geodata from database and base on rules compile map face, dynamic map features and attach appropriate cartometric and exploratory analysis functions. The mapcompiler is created in JAVA environment. To the main libraries used inside of the map compiler belongs: JTS – Java Topology Suite, basic geoprocessor handling OGC simple feature geometry and planar graphs. Batik – a SVG processing libraryFigure 1: The Atlas Engine structureSVG is the most used standard inside of the Atlas. Symbols are stored in SVG format, maps are compiled in SVG andeven client applications are based on SVG. SVG is well adopted by cartographic community and according our opinionit is basic graphic standard for electronic cartography. SVG has many advantages which support usability of this formatlike extensibility, dynamics and possibility of distributed processing etc.2

FRIEDMANNOVÁ - KONECNY - STANEK: OPEN REGIONAL INTERNET ATLAS OF SOUTH MORAVIAA user client applicationAs was mentioned above this application is created completely in SVG. Static components (graphic elements and routines) are stored in the atlas engine database and dynamic ones are partially generated by the atlas engine and partiallythrough routines. Routines are realised by code written in ECMA Script (JavaScript) and manipulating with client application through DOM interface.For function of the client application is necessary to have proper SVG rendering engine on user side. In majority of theproject time we used Adobe SVG Viewer, but nowadays we are in transition to the Batik Squiggle environment. Mainreason for this movement is easier implementation of cartometric functions. We still continue in support of SVG Viewer,but lack of development on Adobe side gives a limited possibility. This is one of relative weak point of SVG, SVG isstandard which is implemented by many providers, every provider implement just subset of this standard. A basic drawingis supported in every renderer but advanced functions are often missing. Batik is nowadays closest to full implementationof SVG standard.Figure 2: Design of the Atlas user interfaceCommunication between client and server is based on extension of OGC WMS standard. This allows two modes of theatlas engine. One mode is serving dynamic map components for native client and another one is generating of static SVGor PNG maps for random WMS client software.An insertion of themesThere are deﬁned an edit interface and set of pre-processing tools for support of insertion of new themes. The editinginterface is composed from interactive forms that help to classify theme, to identify theme source, to identify demands onnew symbols and to deﬁne generalisation demands. Insertion of themes is semi-automated off-line process. Data providermust create an atlas engine database node where are data stored in transformed form. Pre-processing tools are related toharmonisation of data with reference base, extending data model by generalisation parameters and deﬁning of corresponding generalisation and visualisation schemes. Majority of pre-processing is still running in commercial GIS environmentsbut continue transition under JUMP environment (JUMP is desktop GIS software based on JTS library).3

FRIEDMANNOVÁ - KONECNY - STANEK: OPEN REGIONAL INTERNET ATLAS OF SOUTH MORAVIAREFERENCE BASEThe Atlas reference layer is based on DMU25 (Digital Model of Landscape, scale 1:25.000). Terrain lines (valley lines,delineation of watersheds and terrain edges) were derived from contours and elevation points of this model. To terrain lines was added hydrography and network of stable communications. Formed system was organized – terrain linesby geomorfometric characteristics, hydrography by Horton schema in combination with other hydrological parameters,communications by categories. Such deﬁned lines create coverage of cells – landscape skeleton. During scale changesare cells amalgamated. Every feature inside of the atlas database belongs to some cell. All generalisation procedures andchecking are running inside of scale appropriate cells. If some features cross cell borders they are segmented and followcell amalgamation. This procedure supports to keep topological consistency.Figure 3: Example of landscape skeletonOther components of reference base are features which help easy transformation from a source database into the atlasdatabase. These features are selected from stable objects in all potential topographic backgrounds used for geographicmapping in our region. For these backgrounds is also landscape skeleton derived and identiﬁed with the atlas landscapeskeleton. For new mapping is provided the reference base from the Atlas, transformation process is no necessary in thiscase.Geodatabase DMU25 was maintained in coordinate system S-42. For the Atlas purpose was topographic base transformedinto ETRS-TM33 (European Terrestrial Reference System – Transverse Mercator, zone number 33), which is Europeanstandard. Another reason for this conversion is compatibility with GPS measurements. Conversion into ETRS-LCC isimplemented for support of demographic information.SCHEMASSchemas describe behaviour of cartographic features according to scale, purpose, context and interaction with the rest ofentities in a map face. Schemas are based on set of rules, cartometric measurements, generalization algorithms, classiﬁcation algorithms, symbol libraries and scale libraries. Schemas interact with pre-processed parameters, which are storedin geodatabase.Generalisation schemas and proceduresCartographic generalisation in the Atlas comes out from Bertin’s model of conceptual and structural generalisation. Conceptual changes (aggregation, collapse, coalescence) occur in selected focal scales. Between focal scales are realised jusstructural changes (simpliﬁcation, omition, displacement and resymbolisation). Generalisation processes are automated,based on rules and supported by the data model (clusters deﬁnition and simpliﬁcation) and the schemes (resymbolisationand displacement). Usage of real-time generalisation is limited, so only pre-processed combination of features are allowed. Generalisation rules and algorithms are under development, nowadays is implemented: Simpliﬁcation – pre-processing based on Visvalingam-Whyatt and edgebuffer algorithms, stored as a descriptor of line4