GESM-111G: Seminar In The Arts - University Of Southern 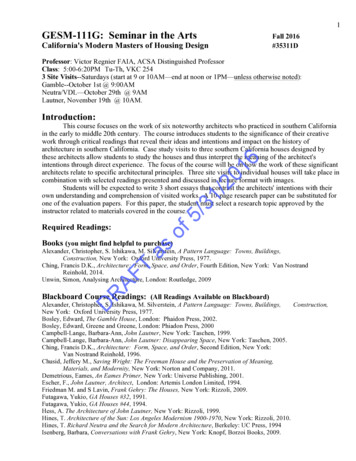 3Class ParticipationA portion of each class will be set-aside for class discussion. You are expected to come to class preparedto discuss the readings and the field trips. The following are the two specific class participationassignments.ONE: At 12 noon on the day before each lecture class you are required to post on blackboardyour takeaway from the readings (40-70 words)TWO: After each site visit by 12 noon on the Monday before the next class period you arerequired to post on blackboard comments and observations about the site visit experience.Short Paper Assignments:5/Materials and Structure5.6.Structural system and expressionMaterials expression, detailing, color, and texture7.Function and response to intended userAttention to UsersTIII.Spatial hierarchy and relationshipsSpatial sequence, procession, and organizationIndoor-outdoor spatial relationshipsIntroduction of natural lightofII.31Spatial Perception1.2.3.4.asI./2016After experiencing the site visit, listening to the lectures, and reading the assigned materials; you shouldwrite a 7 double-spaced page essay which captures your evaluation/analysis of the house. Photos withcaptions. diagrams, bibliography/references, and sketches are not included in the page count. The handout“Fourteen Helpful Hints for Writing Better Evaluation Papers” is useful to read and follow as a guide toimprove your paper. The focus of the paper should be on reconciling the theories, writings, anddescription of ideas present in the lectures and readings against your own experience of the place. Theexperience of each setting should include (although need not be limited to) the following criteria:RAFEach assignment should emphasize your own assessments, insights, and thinking about the most powerfulaspects associated with the architecture of each place visited. Keep in mind identifying signature ideasand visual/experiential techniques are essential.DKeep in mind that photos/drawings (with detailed captions (20-40 words) and/or annotations),diagrams, and plan annotations are an excellent way to communicate your ideas. There are thousands ofphotos of these houses on the internet from which to choose from. Also you should come prepared to takephotos of the house to illustrate additional points. I am most interested in your detailed analysis andobservations of the place--the more ideas the better!Research Paper:The research paper will detail a topic raised in the readings or through the site visits. For example, youmay be intrigued by Frank Lloyd Wright's experiences in Los Angeles and curious about other work hecompleted in southern California. This could involve a scholarly paper or a comparative analysis ofseveral other houses. You may find the issue of spatial sequence intriguing and want to gain insight abouthow it can be viewed across other important residential buildings, which have dealt with this phenomenain unusual and effective ways. There are also a number of other early modernists and case study architectsin southern California for which considerable material exists in the SAFA library. These include IrvingGill, Harwell Hamilton Harris, Rodney Walker, Buff, Straub and Hensman, Craig Elwood, Quincy Jones,and Bernard Maybeck (northern California). Other architects of note that practiced in California duringthis same period include Wallace Neff, Raphael Soriano, Julia Morgan and Paul Williams.

4The topic should be one that has been discussed in class but for which a more in-depth investigationwould be rewarding and warranted. Please avoid overly general topics, such as "The Life and Times ofFrank Lloyd Wright" and do not utilize the houses we have visited as the primary source of information.The paper should be 10 pages in length (double spaced). I will review and approve your outline. Moreinformation about how to write an excellent term paper is available in the handout “Eleven Helpful Hintsfor Writing Better Term Papers”.The RESEARCH PAPER TOPIC AND TREATMENT outline is due Tuesday, October 18th at5:00 PM.The final RESEARCH PAPER is due at Noon, Wednesday, December 7th--the day before the finalexam.16The FINAL EXAM will be on Thursday, December 8th 4:30-6:30PM in VKC 254/20Course Outline:5/31WEEK ONEAugust 23rd, Tuesday:Introduction to Class(ChapterAFTasofAugust 25th, Thursday:Experiencing ArchitectureGuest Lecturer: Robert Harris FAIARequired Readings (86 pgs):Rasmussen (1991), pp. 186-214 (Chapter 8 -- Daylight in Architecture); pp. 215 -2239--Color in Architecture); pp. 224-237, (Chapter 10--Hearing Architecture)Moore, Allen and Lyndon (1974), pp. 71-107, (The Order of Rooms)DRWEEK TWOAugust 30th , Tuesday:6 Architects/6 HousesRequired Readings (65 pgs)Steele (1993) pp. 24-70.Hines (2010) pp. 616-635Hines (2010) pp. 365-370September 1st, Thursday:Principles of ArchitectureRequired Readings (128 pgs):Ching (1996) pp. 1-32 (Primary Elements); pp. 33-45 (Form Elements); pp. 46-7 (Regular andIrregular Forms); 134-151 (Planes); 152-75 (Closure); 179-87 (Spatial Relationships); 227-253(Circulation); 338-45 (Hierarchy)

required to post on blackboard comments and observations about the site visit experience. Short Paper Assignments: After experiencing the site visit, listening to the lectures, and reading the assigned materials; you should . Rasmussen (1991), pp. 186-214 (Chap

Emergence and Dynamics of Conventions and . - Uni