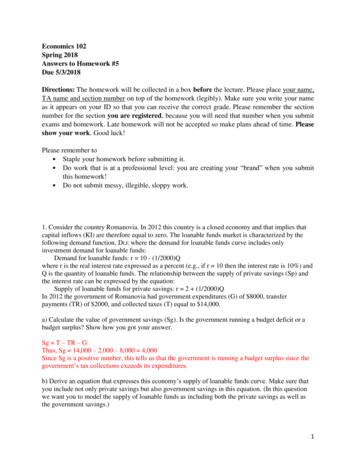 Economics 102Spring 2018Answers to Homework #5Due 5/3/2018Directions: The homework will be collected in a box before the lecture. Please place your name,TA name and section number on top of the homework (legibly). Make sure you write your nameas it appears on your ID so that you can receive the correct grade. Please remember the sectionnumber for the section you are registered, because you will need that number when you submitexams and homework. Late homework will not be accepted so make plans ahead of time. Pleaseshow your work. Good luck!Please remember to Staple your homework before submitting it. Do work that is at a professional level: you are creating your “brand” when you submitthis homework! Do not submit messy, illegible, sloppy work.1. Consider the country Romanovia. In 2012 this country is a closed economy and that implies thatcapital inflows (KI) are therefore equal to zero. The loanable funds market is characterized by thefollowing demand function, DLF, where the demand for loanable funds curve includes onlyinvestment demand for loanable funds:Demand for loanable funds: r 10 - (1/2000)Qwhere r is the real interest rate expressed as a percent (e.g., if r 10 then the interest rate is 10%) andQ is the quantity of loanable funds. The relationship between the supply of private savings (Sp) andthe interest rate can be expressed by the equation:Supply of loanable funds for private savings: r 2 (1/2000)QIn 2012 the government of Romanovia had government expenditures (G) of 8000, transferpayments (TR) of 2000, and collected taxes (T) equal to 14,000.a) Calculate the value of government savings (Sg). Is the government running a budget deficit or abudget surplus? Show how you got your answer.Sg T – TR – GThus, Sg 14,000 – 2,000 – 8,000 4,000Since Sg is a positive number, this tells us that the government is running a budget surplus since thegovernment’s tax collections exceeds its expenditures.b) Derive an equation that expresses this economy’s supply of loanable funds curve. Make sure thatyou include not only private savings but also government savings in this equation. (In this questionwe want you to model the supply of loanable funds as including both the private savings as well asthe government savings.)1

c) Find the equilibrium level of private saving in this economy. Show that the loanable fundsmarket is also in equilibrium.Private saving is equal to the after-tax income (Y-T) minus the household consumption (C).At the equilibrium, Y 600, T 50, and C -50 0.8*(600-50) 440. So private saving isequal to 600 – 50 – 440 160 million.The government is currently running a budget deficit, while the economy is running a tradesurplus. For the loanable funds market to be at equilibrium, we should have:Private saving private investment government deficit trade surplusPlug in the numbers, we have160 100 (70 50) (60 20)The equation holds. Therefore, the loanable funds market is indeed at equilibrium when ourKeynesian or Aggregate Expenditure Model is in equilibrium.d) Suppose that the full employment level of output for this economy is 800 million. To boost theGDP to the full employment level, the government decides to increase its spending while holdingthe tax rate constant. How much should the government spending be increased by?Plugging in Y 800 into the Y AE equation, we get:800 50 0.8 (800 50) G′ 100 (60 20) 690 GSo G’ 800 – 690 110 million. Government spending has increased by 40 million from itsinitial level.e) Instead of a government spending increase, the government decides to use a tax cut to increasethe GDP to the full employment level while holding the level of government spending fixed.What is the size of the tax cut?Plugging in Y 800 into the Y AE equation, we get:800 50 0.8 (800 T ′ ) 70 100 (60 20) 800 0.8T′So T’ 0. The tax cut needs to completely eliminate the tax for consumers. Taxes will bedecreased by 50 dollars.f) Due to a trade dispute with foreign countries, both imports and exports for this economy havefallen to zero. The government still wants to restore the GDP to the full employment level of 800million using a tax cut. Given this information, and holding everything else constant, can thegovernment still reach its goal through this policy?5

3. The balance sheets (sometimes called T-Accounts) of the Central Bank and the privatebanking system in Prelimania are provided below. In this economy we assume that no one holdscurrency (i.e., money doesn’t leave our circular flow framework) and all purchases are made viadebit cards or checks. We also assume that private banks do not hold excess reserves and fullyadjust their holdings after a change in monetary policy. Use this information to answer thefollowing questions:Central BankASSETST-BILLS 15,000LIABILITIESReserves 15,000Private Banking SystemASSETSRESERVEST-BILLSLOANS 15,000LIABILITIESDemand Deposits 60,000 32,500 12,500a. Given the above information, what is the required reserve ratio in Prelimania?Given our assumption that banks do not hold excess reserves, the amount reserves is therequired reserves. We know that the Required Reserve Ratio (requiredreserves)/(demand deposits) 15,000/60,000 0.25 or 25%.b. Now, suppose that the Central Bank makes an Open Market Purchase of 5,000 worth ofTreasury Bills (also called T-bills) from the banking system. Show how this impacts thet-accounts before the banking system adjusts to the required reserve level.ASSETST-BILLS 15,000 5,000LIABILITIESReserves 15,000 5,000 20,000 20,0007

d. Suppose you are told that the full employment level of production is equal to Y2. Given thisinformation and the above graph, how would you describe the current state of this economy? Inyour answer, make sure you describe the current state of unemployment and that you alsocontrast and compare the unemployment rate at Y1 and Y2.Answer:When the full employment of output is less than the equilibrium level, then we say theeconomy is in a boom. The unemployment rate atY1 is smaller than the unemployment rate atY2. When this economy operates at Y1 where Y1 is greater than Yfull employment (Y2), thenwe know that this economy's unemployment rate is lower than its natural rate of unemployment.e. Suppose you know that people in this economy decide to start saving more aggressively foreach additional dollar of income that they earn (note: they will still save at a constant rate, but itwould be a different constant rate). Would this change in behavior alter the equilibrium level ofreal GDP you found in (b)? Draw a graph that illustrates the initial situation and then the newsituation given this change in saving behavior. Explain in words what you have depicted in yourgraph.Answer:We are told that people are now saving more of each additional dollar of income: this impliesthat the MPC is decreasing from its initial level and that the MPS is increasing relative to itsinitial level. The change in the MPC will alter the slope of the AE curve (it will flatten) and thenew equilibrium level of real GDP will be less than the initial equilibrium level of Y1.11

f. Assume that the changes in (e) are still in effect in this economy. Suppose the government nowdecides to increase its spending and assume that this does not change the new saving behavior.How does this policy change affect the planned aggregate expenditure and the level of output inequilibrium relative to the equilibrium you found in (b)?Answer:We know that the change in saving behavior alters the slope of the planned AE (see yellow line).With the increase in the government spending program this will cause the planned AE line toshift up (the orange line). However, we don’t know whether the new equilibrium level of outputwill be higher or lower than Y1. It depends on how much the new planned AE line shifts up withthe change in government spending.12

5. Suppose you are given the following information about an economy:Required reserve ratio is 10%Money Demand (Md): Md 30,000 – 500r where r is the interest rate (When theinterest rate is 3%, it means r 3)Investment Spending (I): I 700 – 20rAggregate Expenditure (AE): AE C I G (X – IM)Consumption Spending (C): C 3600 0.2(Y – T) - 100P where P is the aggregateprice levelGovernment Spending (G): G 450Net Exports (NX): NX X – IM – 350Autonomous Taxes (T): T 100Assume that Transfers (TR) 0Aggregate Demand (AD): AD AE Y C I G (X – IM)Long run Aggregate Supply (LRAS): LRAS Yfe 4,000Short run Aggregate Supply (SRAS): Y 600P – 1,875a. Given the above information and that the equilibrium level of Investment Spending (I) is 620,what is the equilibrium interest rate in this economy?Answer:When Investment Spending (I) is in equilibrium, the following condition holds from the demandfunction of Investment Spending (I):620 700 – 20rr 4 or 4%b. If the money market clears (i.e. the supply of money equals the demand of money), what is thelevel of the money supply in the economy?Answer:Given Part (a), the demand of money in equilibrium is given by:Md 30,000 – 500(4) 28,000Since the money market clears, the supply of money equals the demand of money:Ms Md 28,000c. Given the above information, find the equation that expresses this economy’s AggregateDemand for goods and services.13

The Principles of Economics Textbook