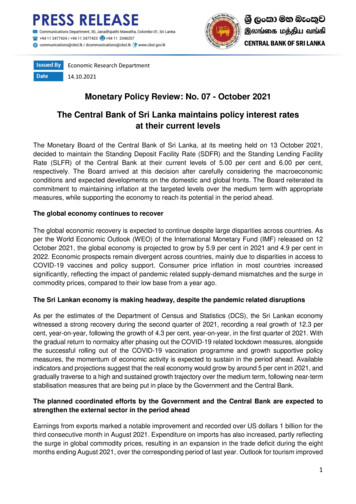 Economic Research Department14.10.2021Monetary Policy Review: No. 07 - October 2021The Central Bank of Sri Lanka maintains policy interest ratesat their current levelsThe Monetary Board of the Central Bank of Sri Lanka, at its meeting held on 13 October 2021,decided to maintain the Standing Deposit Facility Rate (SDFR) and the Standing Lending FacilityRate (SLFR) of the Central Bank at their current levels of 5.00 per cent and 6.00 per cent,respectively. The Board arrived at this decision after carefully considering the macroeconomicconditions and expected developments on the domestic and global fronts. The Board reiterated itscommitment to maintaining inflation at the targeted levels over the medium term with appropriatemeasures, while supporting the economy to reach its potential in the period ahead.The global economy continues to recoverThe global economic recovery is expected to continue despite large disparities across countries. Asper the World Economic Outlook (WEO) of the International Monetary Fund (IMF) released on 12October 2021, the global economy is projected to grow by 5.9 per cent in 2021 and 4.9 per cent in2022. Economic prospects remain divergent across countries, mainly due to disparities in access toCOVID-19 vaccines and policy support. Consumer price inflation in most countries increasedsignificantly, reflecting the impact of pandemic related supply-demand mismatches and the surge incommodity prices, compared to their low base from a year ago.The Sri Lankan economy is making headway, despite the pandemic related disruptionsAs per the estimates of the Department of Census and Statistics (DCS), the Sri Lankan economywitnessed a strong recovery during the second quarter of 2021, recording a real growth of 12.3 percent, year-on-year, following the growth of 4.3 per cent, year-on-year, in the first quarter of 2021. Withthe gradual return to normalcy after phasing out the COVID-19 related lockdown measures, alongsidethe successful rolling out of the COVID-19 vaccination programme and growth supportive policymeasures, the momentum of economic activity is expected to sustain in the period ahead. Availableindicators and projections suggest that the real economy would grow by around 5 per cent in 2021, andgradually traverse to a high and sustained growth trajectory over the medium term, following near-termstabilisation measures that are being put in place by the Government and the Central Bank.The planned coordinated efforts by the Government and the Central Bank are expected tostrengthen the external sector in the period aheadEarnings from exports marked a notable improvement and recorded over US dollars 1 billion for thethird consecutive month in August 2021. Expenditure on imports has also increased, partly reflectingthe surge in global commodity prices, resulting in an expansion in the trade deficit during the eightmonths ending August 2021, over the corresponding period of last year. Outlook for tourism improved1

with the easing of travel restrictions globally and the successful vaccination drive domestically.Despite the moderation of workers' remittances observed in recent months, a rebound is expectedin the period ahead with the improved growth outlook for major foreign employment source countriesand greater stability in the domestic foreign exchange market. The realisation of foreign investmentsin the real sector and the timely adoption of remedial measures by the Central Bank as enunciatedin ‘The Six-month Road Map for Ensuring Macroeconomic and Financial System Stability’ aregradually easing pressures in the domestic foreign exchange market. Furthermore, the Central Bankcontinued to intervene in the foreign exchange market to provide liquidity for essential imports,including fuel. The depreciation of the Sri Lankan rupee against the US dollar is recorded at 6.8 percent thus far in 2021. The Sri Lankan rupee remains largely undervalued as reflected by the realeffective exchange rate (REER) indices. In the meantime, gross official reserves were estimated atUS dollars 2.6 billion by end September 2021. This, however, does not include the bilateral currencyswap facility with the People’s Bank of China (PBoC) of CNY 10 billion (equivalent to approximatelyUS dollars 1.5 billion). Gross official reserves are expected to improve with the measures that arebeing pursued by the Government and the Central Bank to attract fresh foreign exchange inflows, asoutlined in the Six-month Road Map, thereby reinforcing the stability of the external sector in theperiod ahead.Market interest rates have adjusted upwards in response to the tightening of monetary andliquidity conditions, while credit and monetary expansion remained elevatedIn response to the tightening of monetary policy in August 2021, most market deposit and lending rateshave adjusted upwards. Further, yields on government securities witnessed a sharp upward adjustmentwith the removal of maximum yield rates for acceptance at primary auctions. Following these upwardadjustments, greater stability is expected in market interest rates in the period ahead. Reflecting theincreased demand for credit amidst the low interest rate environment, credit extended to the privatesector expanded as envisaged during the eight months ending August 2021. The momentum of creditexpansion is expected to continue during the remainder of the year, with the recovery in economicactivity and continued efforts to channel credit flows to productive and needy sectors of the economy.Meanwhile, credit obtained by the public sector from the banking system, particularly net credit to theGovernment, also increased notably during the eight months ending August 2021. With increaseddomestic credit, the growth of broad money (M2b) continued to remain elevated.Some inflationary pressures are observed, particularly due to emerging global pricedevelopmentsInflation accelerated in recent months due to high food inflation and some acceleration in non-foodinflation. The surge in global commodity prices prompted the Government to remove maximum retailprices on several essential commodities. Along with resultant upward adjustments in other marketprices, this is likely to cause headline inflation to deviate somewhat from the targeted levels in thenear term. While such supply side developments in the near term do not warrant monetary policytightening, measures already taken by the Central Bank in relation to interest rates and marketliquidity would help stabilise demand pressures over the medium term.Policy rates are maintained at current levelsIn consideration of the current and expected macroeconomic developments as highlighted above,the Monetary Board was of the view that the current level of policy interest rates is appropriate. TheCentral Bank will continue to monitor domestic and global macroeconomic and financial market2

developments and stand ready to take appropriate measures, as and when necessary, with the aimof maintaining inflation in the desired range under the flexible inflation targeting framework in themedium term, while supporting and sustaining the economic recovery.Monetary Policy Decision:Policy rates and SRR unchangedStanding Deposit Facility Rate (SDFR)5.00%Standing Lending Facility Rate (SLFR)6.00%Bank Rate9.00%Statutory Reserve Ratio (SRR)4.00%INFORMATION NOTE:A press conference chaired by Governor Ajith Nivard Cabraal will be held on 14 October 2021 at11.00 am at the Atrium of the Central Bank of Sri Lanka and will be livestreamed on Facebook andYouTube.The release of the next regular statement on monetary policy will be on 25 November 2021.3

Market interest rates have adjusted upwards in response to the tightening of monetary and liquidity conditions, while credit and monetary expansion remained elevated . domestic credit, the growth of broad money (M 2b) continued to remain elevated. Some inflationary pressures are observed, particularly due to emerging global price .

Mind and Monetary Arrangements: A Method to Assess .