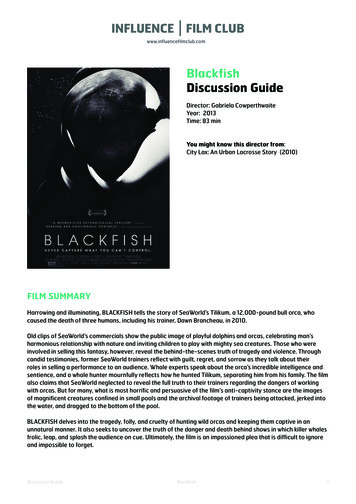 www.influencefilmclub.comBlackfishDiscussion GuideDirector: Gabriela CowperthwaiteYear: 2013Time: 83 minYou might know this director from:City Lax: An Urban Lacrosse Story (2010)FILM SUMMARYHarrowing and illuminating, BLACKFISH tells the story of SeaWorld’s Tilikum, a 12,000-pound bull orca, whocaused the death of three humans, including his trainer, Dawn Brancheau, in 2010.Old clips of SeaWorld’s commercials show the public image of playful dolphins and orcas, celebrating man’sharmonious relationship with nature and inviting children to play with mighty sea creatures. Those who wereinvolved in selling this fantasy, however, reveal the behind-the-scenes truth of tragedy and violence. Throughcandid testimonies, former SeaWorld trainers reflect with guilt, regret, and sorrow as they talk about theirroles in selling a performance to an audience. Whale experts speak about the orca’s incredible intelligence andsentience, and a whale hunter mournfully reflects how he hunted Tilikum, separating him from his family. The filmalso claims that SeaWorld neglected to reveal the full truth to their trainers regarding the dangers of workingwith orcas. But for many, what is most horrific and persuasive of the film’s anti-captivity stance are the imagesof magnificent creatures confined in small pools and the archival footage of trainers being attacked, jerked intothe water, and dragged to the bottom of the pool.BLACKFISH delves into the tragedy, folly, and cruelty of hunting wild orcas and keeping them captive in anunnatural manner. It also seeks to uncover the truth of the danger and death behind shows in which killer whalesfrolic, leap, and splash the audience on cue. Ultimately, the film is an impassioned plea that is difficult to ignoreand impossible to forget.Discussion GuideBlackfish1

www.influencefilmclub.comFILM THEMESBLACKFISH argues against orca captivity, challenges the entire marinepark industry, and asks the public to consider their complicity as well.MARINE PARK INDUSTRYThe marine park industry is a multi-billion dollar industry that is popularworldwide. BLACKFISH focuses on SeaWorld and its captivity of orcas. Inthe film, the wondrous promotional videos and celebrity endorsementsprovide a glossy cover for the more disturbing brutality, which was notreleased to the public. The film suggests that SeaWorld’s relationshipto the public is more important than its relationship to former trainersand animals because the public provides the income and incentive tokeep the show going. Ultimately, the marine park industry cannot thrivewithout public support.PERFORMANCEIn the film, former SeaWorld trainers reflect on how they were told whatto say, including “scientific facts” that were not true. For example, orcaslive longer in the wild, almost as long as humans, but former trainerswere told to say that wild orcas only lived 25-30 years, and even longerin captivity. Another lie involves the collapsed dorsal of Tilimuk andother orcas. It is, in fact, not common, and indicative of living in captivity.SeaWorld itself is performing, in a sense, when it does not fully disclosethe details of attacks to the public or when it tries to spin human injuryand death another way.ANIMAL CRUELTY AS ENTERTAINMENTCritics of orca captivity argue that SeaWorld does not educate, itentertains. Orcas perform unnatural tricks, and the public does not seehow they behave in the wild. The most vociferous critics may comparemarine parks to other forms of animal entertainment such as cockfighting and dog-fighting. These were once popular and legal, but arenow illegal in the U.S. Whales are not pitted against each other explicitly,but the film shows that they can exhibit aggressive violent behaviortowards each other through punishment-led training or because theyare confined in small spaces while grouped together in unnaturally mixedpods. One speaker in the film predicts that marine parks will one day inthe future be regarded as barbaric.NATURAL BEHAVIOR VS. LEARNED BEHAVIOROrcas are intelligent animals that can learn behaviors and performon cue. But they are creatures with their own innate behaviors, theirown communication and relationship styles. Living in an unnaturalenvironment, they are forced to perform unnatural acts in order to befed. This artificial environment conflicts with their natural instincts,especially when it comes to group dynamics. Killer whales have their ownfamilies and pods with distinct cultures, but they are grouped in mixedpods that may have social friction within. This is especially dangerousconsidering that orcas can display dominance and attack each other,becoming more aggressive to humans as well.Discussion GuideBlackfish“[SeaWorld has]tremendousfinancialresources andcould play a keyrole in creatingsea sanctuarieswhich could bea profit-makingendeavor. Ibelieve peoplewould flock toa site where akiller whale isbeing a killerwhale for thefirst time—somethinginfinitely moresatisfying thanseeing a killerwhale dance theMacarena.”-Gabriela Cowperthwaite, Filmmaker2

www.influencefilmclub.comFURTHER DISCUSSIONS:1.NOTES:Why do you think the film is called BLACKFISH? What does this FirstNations word mean and how does it compare to “orca” and “killerwhale”?2. BLACKFISH interweaves old promotional videos, often of a nostalgic80’s vibe, throughout the film. What is the effect of these imagesand tones? How has the film affected your memories of SeaWorld?3.What are the arguments for and against breeding animals incaptivity?4. How does the marine park industry compare to zoos and circuses?What are the justifications for their continued existence?5. Does the human cost in injury, trauma, and death make the caseagainst captive orcas more important to you? Or are the humantragedies irrelevant in the discussion of animal rights?6. Is SeaWorld responsible for the animals it sells to other marineparks? Is it responsible for the training it gives to visiting trainerswho will be working in other marine parks?7. SeaWorld is primarily designed for entertaining the public. Howmuch does it owe the public in terms of disclosing accidents, attacks,and the health of its animals?8. What impact do you think BLACKFISH has had on SeaWorld and itspublic perception? SeaWorld brings in considerable tourism moneyfor San Diego. What do you imagine the complications to be in therelationship between the city and SeaWorld?9. What can be done to improve the lives of animals in captivity? Whatare the complications of sea sanctuaries and who would opposethem? Can these also be profitable for those who create them?10. How important is animal intelligence to you when debating animalcaptivity and marine parks? How is animal intelligence measuredand would you defer them different rights according to their humanperceived intelligence?Discussion GuideBlackfish3

www.influencefilmclub.comFILM FACTS: The killer whale (Orcinus orca), also known as theorca or blackfish, is a toothed whale belonging tothe dolphin family. In their natural habitat, most orcas travel upto 100 miles a day and stay near, or with, theirfamilies. Orcas are powerful predators with teeth that canbe four inches long. They eat seals, sea lions, andother whales, and they can grab seals off the ice. The orca pods use co-operative huntingtechniques to catch their prey. Some familyhunting groups can me made up of up to 40individuals. Orcas make a wide range of sounds forcommunication. They also use echolocation tocommunicate and hunt. Killer whales can be found in all oceans on Earth,including the frigid Antarctic and Arctic andtropical seas. SeaWorld’s corporate incident log lists morethan 100 incidents of orca aggression, manycausing injuries to humans. 53 orcas are currently in captivity at 12 marineparks around the world. SeaWorld has 23 orcasliving in its 3 U.S. marine parks. Shamu was firstbrought to live at SeaWorld in the late 60s. 37 orcas have died in captivity in SeaWorld’sthree parks. There have been 30 live births atthe parks, 10 of which died, along with 10 of theirmothers. In March 2013, following an incident in which achild was bitten by a dolphin at SeaWorld, theUSDA conducted an investigation and citedSeaWorld for several violations of the AnimalWelfare Act. In the “Journal of Marine Animals and TheirEcology,” John Jett and Jeffrey Ventre put forththat captive orcas are more vulnerable tomosquito-transmitted diseases. At least twohave died in marine parks. In a CNN interview, filmmaker Cowperthwaitesaid that many people ask if she wants SeaWorldto be shut down. She explains that she doesn’twant that because SeaWorld has great resourcesto build sea sanctuaries for the orcas. Keiko, the killer whale, was in captivity for 22years. After 4 years of effort, much privatefunding, and Jean-Michel Cousteau’s help, Keikowas returned to the wild. However, Keiko wasnver totally free, always dependent on humansupport. On his blog, Cousteau writes, “Afteryears of training, at great expense, Keiko wasfinally able to catch and eat live fish and wasreturned to the waters in Iceland near where hewas captured. He never integrated with the wildwhales he encountered.”WAYS TO INFLUENCE1.Share this film. Give others a chance to experience this powerful documentary.2. Support the Dawn Brancheau Foundation, created “in her honor to continue the legacy of the workimportant to Dawn during her life.”3.Sign the petition to “End Captive Orca Breeding Program” at SeaWorld on change.org.4. Become a member of Save the Whales and learn about how you can help.5. Support the The Born Free Foundation. Educate yourself and enlighten others about animal captivity.Discussion GuideBlackfish4

www.influencefilmclub.comWe believe a good documentaryis just the beginning In a world of sound-bites, documentaries provide an opportunityto think, understand, share, and connect with the world.They are controversial, divisive, fascinating, unexpected, andsurprising. They can be thrillers, dramas, comedies, romance,tear-jearkers, and horror films.Documentaries provide the perfect topic for meaningfulconversations. If you want to talk about the things that matterwith people that matter then pick a film, invite your friends, andwatch & discuss together. It’s as easy as that.Influence Film Club – We are the conversation after the film.Influence Film Club is a not-for-profit dedicated to expanding audiencesfor documentary films.

frolic, leap, and splash the audience on cue. Ultimately, the film is an impassioned plea that is difficult to ignore and impossible to forget. Blackfish Discussion Guide Director: Gabriela Cowperthwaite Year: 2013 Time: 83 min You might know this director from: City Lax: An Urban Lacrosse Story (2010) Discussion Guide Blackfish 1

The Word of the Lord - Seeing Jesus in the Old Testament