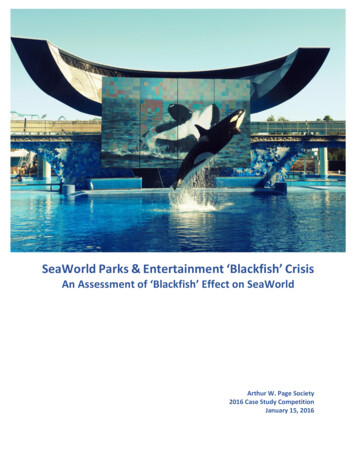 AbstractSeaWorld Parks and Entertainment, Inc. is fighting for its survival post ‘Blackfish’, a documentaryfocusing on killer whale, Tilikum, involved in the death of three people, and inhumane treatmentof orcas by the marine park. With an 84 percent drop in profits, celebrity criticism and widespreadsocial media backlash, this crisis has now become a valid threat for SeaWorld. New CEO, JoelManby, is working hard to win back the trust of the public and investors through multifacetedmarketing campaign. This case study analyzes public response, ‘Blackfish’ effect on business, andSeaWorld’s attempt at reviving its’ former glory.3

OverviewSeaWorld Parks and Entertainment, Inc. crisis began with the screening of the controversialdocumentary ‘Blackfish’, directed by Gabriela Cowperthwaite, in 2013. The documentary focuseson the death of former SeaWorld trainer Dawn Brancheau by an orca, Tilikum, held captive bySeaWorld, and another controversy over the captivity of killer whales. The backlash from thedocumentary led to decline in attendance and raised concerns among the marine-theme parkinvestors. In 2013, SeaWorld’s attendance fell by four percent and the price of its shares was cutin half in a year (Mochari, 2014). According to the Wall Street Journal, "The companyacknowledges that the fallout of Blackfish--which it says is a work of propaganda--is hittingattendance (Mochari, 2014, para 7).” However, Dawn Brancheau’s family released a statementand former trainer, Mark Simmons, who was part of the documentary, in numerous interviewsbacked SeaWorld, and called the documentary inaccurate.Following the crisis, SeaWorld has taken an aggressive approach to reputationmanagement by launching various campaigns to tell their version of the story. The marine parkthrough these new campaigns is providing facts about its animal care efforts and “outlines itsmultimillion-dollar deal investments in killer whale research” (Daniels, 2015). By the end of 2015,SeaWorld also announced that they would phase out its iconic ‘Shamu’ Show in its San Diegopark in 2016 and launch a new orca presentation by 2017. “The new show will demonstrate howwhales behave in the wild, with a focus on conservation efforts,” said SeaWorld CEO Joel Manby(Los Angeles Times, 2015). People for the Ethical Treatment of Animals (PETA), which iscampaigning against SeaWorld for years now, did not support the decision and called on the parkto release its whales into ocean sanctuaries. “This move is like no longer whipping lions in a circusact but keeping them locked in cages for life,” said PETA, Director of Animal Law Jared Goodman(Los Angeles Times, 2015).With the change of guard at SeaWorld, the announcement of the end of ‘Shamu Show’ andfiling of a lawsuit against the California Coastal Commission over ban on the breeding of orcas,SeaWorld has now begun its journey on the road to recovery. However, what remains to be seenis if it can survive the blows of animal activists and the general public who want them to releasethe whales into ocean sanctuaries. The ‘Blackfish’ crisis has raised a question on whether animalparks such as SeaWorld have the right to hold wild animals’ captive for entertainment?Company BackgroundHistory of SeaWorldBased on SeaWorld official website, SeaWorld Parks and Entertainment, Inc. was foundedin 1964 by George Millay, Milt Shedd, Ken Norris and David Demott. The four friends originallyplanned an underwater restaurant, which was later scrapped and led to the foundation of a marinezoological park. With 1.5 million investment, the park was constructed on 21 acres in San Diego(CA) and opened for public on March 21, 1964. The first park had 45 employees, several dolphins,sea lions and two seawater aquariums. It was a huge success and drew over 400,000 visitors.Today, SeaWorld has 11 theme parks in the United States, including Orlando (FL), San Antonio(TX), the first park in San Diego (CA), Cypress Gardens, Winter Haven (FL), Boardwalk andBaseball, Haines City (FL), Busch Gardens, Williamsburg (VA), and Sesame Place, Langhorne,(PA). The park generated 1.8 billion in revenue in 2014 with over 22.4 million people visiting4

the park (SeaWorld, 2016). SeaWorld also has Discovery Cove, Orlando, which is an “exclusivetropical oasis where visitors can swim with the dolphins and other sea life.” Aquatica SeaWorlds’sWaterpark in Orlando, San Antonio, and San Diego, “gives visitors a unique experience bycombining water park thrills, nature, and animals.” In 1976, Harcourt Brace Jovanovich, Inc.purchased SeaWorld and later all six amusement parks were bought by Anheuser-Bush. SeaWorldParks and Entertainment is now a subsidiary of SeaWorld Entertainment, Inc. (SeaWorld, 2016).On January 19, 2013, SeaWorld faced a backlash with the release of documentary‘Blackfish’. The documentary accused SeaWorld of mistreating captive killer whales. The crisisescalated fast and damaged SeaWorld’s reputation, and the company had to face decliningattendance, earnings, and stock prices (See Appendix A).Corporate CharacterThe corporate character is a “unique identity, its differentiating purpose, mission, andvalues” of a company (Arthur W. Page Society, 2012-13). Today, the company’s charac

The controversial documentary was first premiered at the Sundance Film Festival on January 19, 2013. It was later produced by Magnolia Pictures and acquired by CNN Films, and was aired for a wider audience. Nearly 21 million watched the documentary on CNN and within two years, 'Blackfish' became a threat to the brand 'SeaWorld.'

Why "Blackﬁsh" is Propaganda, not a Documentary